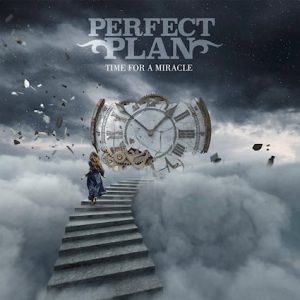 Perfect Plan has released their sophomore album “Time For a Miracle”, the follow up to their 2018 debut album “All Rise”. Having no exposure to this group before this album I went into this listening journey with no expectations.

Right out of the gate the opening title track, failed to grab my attention. The long and drawn out intro wasn’t interesting and lasted 1:26 too long. For me the track opening was boring and really could have been shortened by at least a minute of time bringing the track closer to a four minute track instead of adding the unneeded filler. Once the track met the true starting point, it wasn’t a bad track, but missed the chance to make that first great impression. It was also a bit slow for an opening track. Instead I would have liked something that just jumped out right away, to make the statement of what was to follow in this experience. During this track found myself hoping the album had a miracle in it since the start was less than desirable.

That miracle came in the second track “Better Walk Alone” and immediately had me wondering like so many other albums before this, why the label decided to start the album off on such a boring note. My hope is that one day all the labels out there will realize listeners want to be grabbed from the first note… not two or three songs into the album. Track order in an album more important than artists and clearly labels, realize. Such a missed opportunity.

With this second track there’s this incredible nostalgic feeling of the 80’s and the band Survivor. The vocals channeled the late and great Jimi Jamison, along with the feel of the music. Having grown up in this era, for me Perfect Plan felt authentic in this genre with this track, then as the album progressed they continued to infuse that flavor through their music. Something that I feel is still quite rare in melodic rock, finding bands that feel authentic.

The true ballad on this album is “Fighting to Win”. It had every cheesy 80’s feeling built into and I loved it! The vocals really were on display in this track. The control, range and vulnerability solidify the strength of Kent Hilli’s vocals. Then the slow wailing guitar solo made this track truly convincing this band has a grasp on their writing, understanding of the genre and the ability to deliver well produced tracks with precision.

Perfect Plan also gives listeners a display of the power in their music with tracks like “Everytime We Cry” and “Don’t Blame it on Love Again”. There’s a really nice push and pull in the tempos and vocals throughout these songs that show a different side of this group. Matched with enjoyable layering in these tracks from the instrumental arrangements and perfectly placed solos.

There was one track that threw me, “Nobodys Fool”. I immediately wondered if they did a remake of Cinderella’s 1986 iconic hit “Nobody’s Fool”, but that wasn’t it. Instead it was an unexpected blues rock track that really didn’t feel as if it belonged on this album. It is harder, heavier and just not as melodic. For me, I felt that this one disturbed the flow being that the track was in the middle of the album. My thought, it would have been better to add this as the last track on the album, sort of as a closing. So this one, while a fun track, was just too contrasting to fit the flow of the album.

What started out and a listening experience with a sour note, quickly recovered to a great listening experience, minus the additional track of concern. My overall opinion is this was an unexpected listening experience that really spoke to me. Two out of the twelve tracks didn’t work for me the way they were laid out, but the other tracks were so gratifying I can easily overlook the ones that didn’t add to the experience and I think you may feel that as well. Go spin this one today and enjoy! It’s out everywhere you stream music and we will be adding a few of the new tracks on Dazed Rock Radio so you can find the guys on the station as well.

January 15, 2018 Diane Webb
Help Get The Word Out By Sharing This With Your Friends

April 2, 2018 Diane Webb
Help Get The Word Out By Sharing This With Your Friends

October 16, 2016 Diane Webb
Help Get The Word Out By Sharing This With Your Friends