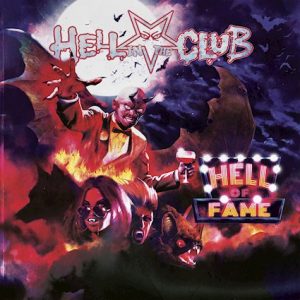 Italian rockers Hell In the Club are back with new music! Just released on Friday, their 5th album “Hell of Fame”. Was this one up to par with their previous releases?

In short answer, yes! This was one hell of listening ride! From the first note to the very last, there was so much rockin’ going on and so many nuances that I immediately hit repeat to play it again after the first listen.

Personally, as a fan of great vocals, I truly appreciated the fantastic job done with harmonizing the vocals on this album. That’s something that always makes me want to sing along with an album and instantly makes an album memorable to me. Listeners want to feel like they have a part to join in on the album and vocals is that space for many. So when a band does a release that’s well thought out and produces this feel, it’s an instant attention grabber. The hooks will keep listeners coming back for more.

There is a lot going on throughout this album and many little things that caught my attention. When I got to the track “Worst Case Scenario”, it felt a bit familiar in style with the recent DeVicious album leaving me to wonder if it’s a regional sound influence that I was hearing. Or just an odd coincidence that went into the writing. Not a sound of ripping someone else’s sound, just a comfortable familiar feel.

This album has a ton great tempos, lots of push and pull, it’s raw, unadulterated hard rock with great melodies. I even felt the feel of old school Mötley Crüe in the track “Here Today, Gone Tomorrow” that made me think of the 1981 debut single “Live Wire”. I really enjoyed this track and ran across that Crüe feel again with the track “Mr. Grouch”. I don’t know what the band’s been up to while writing this album, but they should keep doing whatever it is because this album is simply incredible.

The tracks on this album are like slathering layer after layer of intricate riffs, polished hooks, meaty solos, heavy bass lines and steady drum tempos into this perfectly delicious musical tiramisu. It’s just the essence of great rock music.

The band does drop the tempo for at least one track with “Lullaby For An Angel” which felt perfectly placed in the running order. After all the mania in the first six tracks they clearly need to break up the momentum and catch their breath.

Hell In the Club has released a solid melodic hard rock album with “Hell of Fame”. I urge you to give this one a shot, we will be adding some of the new tracks in the Dazed Rock Radio rotation this week so you can find them on our station too!

July 25, 2018 Diane Webb
Help Get The Word Out By Sharing This With Your Friends

Help Get The Word Out By Sharing This With Your Friends“Look What I’ve Become,” the […]

May 23, 2018 Diane Webb
Help Get The Word Out By Sharing This With Your Friends