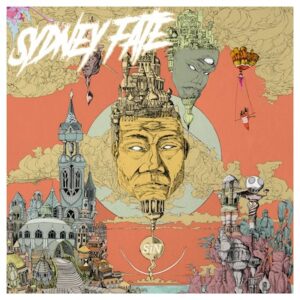 Sydney Fate – Silicon Nitride: This is an album I almost passed on simply based on the two videos that have already been released for this album. “TACENDA” and “Sound Alive” sound as if the band came to the studio to record before they were ready to do the album and sadly they are the first two tracks on it. They fail to impress and if you are a listener that is very quick to make a decision on any band based off whatever is first on the album or out on video you might just pass up what is great on this release.

What failed to connect for me were the clean vocals on the first couple of tracks. There were other inconsistencies on a few other tracks but not as heavily as these two. When you are mixing clean with screams, they have to be consistent and for me, this is what I feel is the weakness of this album. Which really is too bad because the lyrics are so strong on these tracks, but not being able to get past the vocals, I just found myself disinterested.

Once I got past these two tracks, the strengths of the album were many. The screaming vocals were on target. From calm low growls to raging, intense and aggressive they were spot on. The music itself was powerful and full of great melodies and progressive riffs. Lastly, the lyrics are powerful, full of insane levels of depth and hard hitting.

When the vocals came together right on this album, it was great. I wanted more of that on the entire album. For me the album really hit me at the third track with “Falling Forward” and carried through into “Courthouse Problematic.” Then I got caught off guard with the vulnerable track “Chelsey Grin” which has this melancholic, haunting feel to it. Easily one of my favorite tracks on the album.

If you can make it past the first two tracks on the album and get to what felt to me as the real start of the album, you will find a lot to love.

The heavy tracks that I really liked the best “Home”, Falling Forward” and “Courthouse Problematic” which leave me with the worst scream envy! Best unexpected track was definitely “Chelsey Grin”.

All in all for a second release from such a young band, I think they did a really good job on this album. I’d say for their future releases, do some work on the clean vocals and clear out the inconsistencies that were off putting. I think if the clean vocals get more developed this band’s opportunities will be limitless. Definitely give this band a listen, but remember what I said about the first two tracks and give the full album a listen. By the end you will be hooked.

December 14, 2017 Diane Webb
Help Get The Word Out By Sharing This With Your Friends
more

Help Get The Word Out By Sharing This With Your FriendsmoreThis February, Listenable Records will […]

February 4, 2019 Diane Webb
Help Get The Word Out By Sharing This With Your Friends
more

April 6, 2016 Diane Webb
Help Get The Word Out By Sharing This With Your Friends
more