Revolverlution To Release Debut Single
“Going Out With A Bang”
March 13, 2020 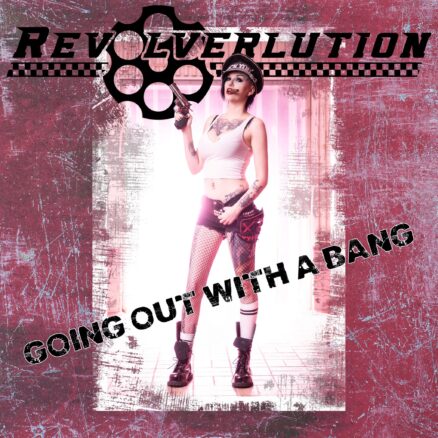 What do you get when musicians who’ve previously worked together on other projects have grown tired of not having a voice or say in the music? You get an electrified surge of creative power that has become so tired of being suppressed that it fights to get out anyway it can. Meet the diesel filled Rock N’ Roll band Revolverlution.

From out of the gutters of Southern Sweden and into fortune and fame is Revolverlution’s personally twisted Cinderella story. No longer standing in the shadows, but grabbing their creative instincts by the throat to write music that’s personal, powerful and a revolt to any who dare try to tame their hunger to make music.

After years of working together over various musical projects that left them wanting more, it was time to breakout on their own. What started out as just a creative outlet, has turned into a band without any boundaries. Music that’s come out of fun, curiosity and experimental exploration has delivered the first wild single, “Going Out With A Bang”. It’s authentic, rowdy and a creative release of pent up aggression.

Releasing on March 13, 2020, Revolverlution intends to show the music world what they can do together on their own terms. They’ve been careful to not reveal too much about themselves just yet to let fans explore their music, but that will soon be revealed with their coming music video for their debut single.

Revolverlution has plans to release more new music in the coming months as well as perform a number of live gigs. More information will follow as those dates are announced.

“Going Out With A Bang” will be available through all major streaming platforms.

June 9, 2020 Diane Webb
Help Get The Word Out By Sharing This With Your Friends

New Video: Revolverlution – Going Out With A Bang

March 13, 2020 Diane Webb
Help Get The Word Out By Sharing This With Your Friends

November 16, 2020 Diane Webb
Help Get The Word Out By Sharing This With Your Friends

Help Get The Word Out By Sharing This With Your Friends‘Crash and Burn’, the newest […]

A Tourist in London

Interview with Will Andrews of Ten Miles Wide