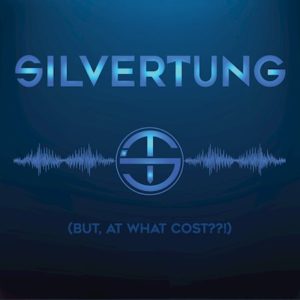 Having never run across Silvertung before, I turned the new album and was surprised at the early 2000’s feel in their music. Having been immersed in the rock music scene of the early 2000’s first hand, ‘(BUT, AT WHAT COST??!)’ instantly took me back to the early days of many beloved bands.

In order to give a proper review of this new album, I had to go back and check out some of their previous releases to see how the band has progressed over the years. I got found myself truly digging a couple of their older tracks like “Coming Alive” (Never Too Late, 2015), “Ain’t That A Bitch” (Out of the Box, 2016). I didn’t dig their 2017 unplugged album ‘Lighten Up’. I’ve never been a fan of rock bands doing unplugged albums. To me those albums usually sound too far off from a bands rock roots.

I am happy to say that with ‘(BUT, AT WHAT COST??!)’, the band gets plugged back in and puts forth a really great album. To me, they still have that early 2000’s sound, which isn’t a bad thing. I hear bands like Adema, Godsmack, Linkin Park, Saliva, Three Days Grace and more. All those influences twisted up as Silvertung, makes a really cool sounding album. Rock fans will be able to appreciate that this is not an overly complicated album. It’s just something you put on and jam to.

The music itself is packed with some cool riffage, bits of distortion throughout, intent tempos, powerful drumming and singable vocals. You won’t get any growls or gutturals on this album. What you will get are raw, raspy, intense vocals that stay singable. So for the fans who love to be able to sing along, this is your album.

I think Silvertung has a truly enjoyable album for the fans to get their hands on with ‘(BUT, AT WHAT COST??!)’. Definitely give this one a try when it releases on February 15th! If you want to pre-order, you can do so at the link below. Also, enjoy a track off the new album below.

July 19, 2021 Diane Webb
Help Get The Word Out By Sharing This With Your Friends

May 4, 2021 Diane Webb
Help Get The Word Out By Sharing This With Your Friends

Europe, the band, Bag of Bones concert tour and why the USA was left out again.

Sunstorm – The Road To Hell