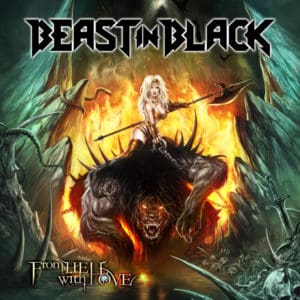 When I first reviewed ‘Berserker’, I enjoyed it so much I gave it a perfect score! Since then, it’s an album that I sought out on vinyl and is still constantly in my playlist rotation. So when I heard the band was set to release their second album, I rejoiced and cringed at the same time. When a new band releases their first album and it’s that great, I often am completely let down by their next release. I am happy to say that did not happen with‘From Hell With Love’. I was completely surprised, shocked and thrilled to hear it was as good as the first album! What a rarity for a new band to have to back to back releases that sound this amazing!

Already having heard “Sweet True Lies” and “Die By The Blade” thanks to video singles being released, I was excited to get my hands on the full album. Could these just be two lucky hits and the rest a flop or could it be Beast In Black was going to completely shatter my mind again this time around? Well that answer came today as the promo landed in my inbox!

From the first note on “Cry Out For A Hero” my interested was peaked and the excitement starting pulsing through me like fire! All of the elements I loved so much from ‘Berserker’ were still there in the new music. The feel of the 80’s cheesiness, the epic intensity of the music, the raw yet insane vocals and the melodies all wrapped up into a full eargasm that just kept giving. The Beast In Black guys once again melted my cold black heart into a puddle of musical bliss! And yes, this review will be a little cheesy, but FFS, music is supposed to make you feel something. That’s what this album did to me and I am just going with it! So buckle up and prepare yourselves!

The title track, “From Hell With Love” starts out with a 80’s synth intro that is definitely one you could find on any 80’s crap movie that ever existed! Authentic as hell, but then killer riffage joins the synth’s making it something well above a majority of the true shit music of the 80’s I suffered through first hand. As BIB adds their musical spin to this track it brings the 80’s to 2019 with an updated track that still holds the throwback feel I love so much with their sound. Perfect ordering on the tracklist to lead into “Sweet True Lies”.

The epic, cheesy video that accompanies this single is definitely all things the 80’s sucked for, to include the hair, the clothing and the sleazy, creepy dudes! Yikes, let us never return to that again! This track being the first I sampled is definitely a great track. All the yummy elements power metal should have, crazy riffage, over the top lyrics matched with awesome melodies and raspy and high-pitched vocals and that tempo! Yes!! Great track!

“Repentless” is a much darker track on the album. I like how they managed to shake up the variety in the album, leading to something a little heavier and substantial to throwback style they have. The guitar work on this one is unique and the tempos are nice and fast, plus that solo… yes by this point my heart was thawing! But wait, throw in some synths in the second half of the song? What these guys doing to my emotions?

Watch Die By The Blade:

Bring on “Die By The Blade”! By this point, I think I lost all self-respect as I was ready to put on some spandex, rat my hair up with a can of Aquanet, put on a fringed leather jacket, chain belt and rock out! The vocal octave changes on this track from low raspy to high wailing screams were great and then matched with wailing guitars.

But wait, “Oceandeep” came along and completely stopped that urge with a serious slow down. I mean flute sounding synths and a tempo slow down, you won’t even get a single drum beat until mid-song. At first I was thinking, what in the hell are they doing to me, my emotions were all over the place until the last third of the track heated up. Strong, angry and intent. This is definitely the album ballad, with a twist. Strange but good at the same time.

Then just as quickly, they went right back into an upbeat tempo with “Unlimited Sin” which starts out a little soft almost pop’ish, but then mmmmm hmmm it heated up and the vocals went wild as the synths lashed my ears. Great melodic track! I also love the melody of the vocals in the bridge, very nice addition, something that’s also on a number of the other tracks on this album too. You will get another heavily synth’d track right after with “True Believer”. The vocals on this track though, are a bit different from the rest of the album, very clean straight from the beginning. I really liked hearing this style to Yannis Papadopoulos’ voice. Of course he does throw in some crazy vocals too, but this track is one where you really do get to hear his great voice.

Pre-Order From Hell With Love Via Nuclear Blast Records Here

Onto the last three tracks….. “This Is War” starts out with some trigger style guitar riffs and chanting vocals. It’s heavier than the last couple of tracks with a glorious feel. I really enjoyed a little feel of intensity and anger in this one. Onto “Heart of Steel” and there’s intense synths right off and almost a feel of the band Survivor in the beginning of this track. Then the bridge takes it up a notch with a big chorus reminiscent of Sabaton, but as the song drops into the next verse it has that same Survivor feel. It’s does this push and pull to the guitar solo, then rips a wild solo and comes back in with a slow, soft vocal. Great mix up in this track, I really enjoyed this one!

Onto the last track and the wrap up of ‘From Hell With Love’, “No Surrender”. The guys aren’t going to let the listeners leave without one last intense track! I felt the heat rising up again as this track started. It’s got a great tempo, really clean vocals you can sing with through the entire track and musically it’s a really well done track. Throw in a few high screams and a great solo with some fancy finger work across the frets and this track perfectly wraps up this entire musical experience.

Having enjoyed this album as much as the last one, I’ve already ordered the double vinyl release in the limited orange. I can’t wait to add this one to my collection! You still have time to get your pre-orders in. Go order your copy today from Nuclear Blast Records!! Then run out and stock up on some extra strength Aquanet, Beast In Black is bring the 80’s back!

In June I will be covering Beast In Black live from Sweden Rock Festival, it’s one band I am really looking forward to! Keep an eye out for all the coverage to come later in the year and until then, enjoy their new music. Also revisit the first album too!

Beast In Black, ‘From Hell With Love’ Tracklisting:
Cry Out For A Hero
From Hell With Love
Sweet True Lies
Repentless
Die By The Blade
Oceandeep
Unlimited Sin
True Believer
This Is War
Heart Of Steel
No Surrender

September 2, 2016 Diane Webb
Help Get The Word Out By Sharing This With Your Friends

Help Get The Word Out By Sharing This With Your FriendsLast Friday night, August 26, […]

Crypta – Echoes of the Soul

June 13, 2021 Diane Webb
Help Get The Word Out By Sharing This With Your Friends

Stitched Up Heart Performs at Sunshine Studios in Colorado Springs

New Video: THE HAUNT – Why Are You So Cold