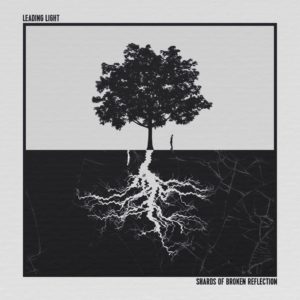 Leading Light Shards of Broken Reflection is set to release this Friday, November 2nd. I am happy to say the Visby/Stockholm metal band has a strong release with this album.

I first came across this band when they were announced to perform as part of the NEMIS  program at Sweden Rock Festival. This program, known as New Music In Sweden, works tirelessly with up and coming bands across Sweden. I discovered Leading Light while doing the advance look at who the NEMIS bands were for the year. When I heard their music, I knew instantly this was a band I had to see perform. Not only perform, but sit down with and talk about their music. Since last year, I’ve kept an eye on them while waiting for the new music.

The guys have numerous releases spanning from 2012-2017. Listeners can check out previous releases now for the foundation of everything Leading Light. The most recent, their 2017 single “13” refreshed the listeners, while reminding them they were still making music. Fast forward to today and Leading Light are just days away from the new release. What can listeners expect this time around?

Listeners can expect their most progressive album yet! The band has evolved their writing from their previous releases. It’s a subtle change, but in the way a band should progress and that fans can ease into. Old fans do not have to worry that they will hear something entirely different with the new album. New fans will discover a band that has discovered themselves, with a true metalcore sound. It’s heavy, with grinding depths of screaming vocals that metalcore fans look for. The music has lots of distortion, heavy bass, varying tempos and at times almost an ethereal vibe weaving into it.

Leading Light Shards of Broken Reflection is available this Friday via Spotify, iTunes and YouTube Music.

As I sat back and listened to Shards of Broken Reflection numerous times, I found myself lost in the music. There’s times it’s really intense, then others where it’s almost a relaxing feel to it, while solidly metal. Of course within this genre, there’s no way any band can keep up the super hype tempo through an entire album. How the hell would the survive the live performance? The running order and song placement gave the feel to what you could expect in a live setting. Some manic intensity, a slow down, then right back into the intensity again.

I am really diggin’ this album. It’s got a lot to enjoy. It’s fresh, it’s heavy and modern. I think Leading Light has put out a solid new release with Shards of Broken Reflection. It’s worthy of music listeners and an album they can be proud of.

My recommendation, BUY IT!

Tracklisting:
Reflection
World Of Apathy
I Bleed Alone
I’m Nobody
And Hell Followed With Me
Burn Me
Acquiescence
Chasm
Reckoning
Dödssvart (Black Death)
Heart On Your Cheek

I chat with Leading Light at Sweden Rock Festival 2017, check out that interview here.

March 13, 2018 Diane Webb
Help Get The Word Out By Sharing This With Your Friends
more

January 15, 2019 Diane Webb
Help Get The Word Out By Sharing This With Your Friends
more

January 5, 2021 Diane Webb
Help Get The Word Out By Sharing This With Your Friends
more

Help Get The Word Out By Sharing This With Your FriendsmoreHeljarmadr (Dark Funeral, Grá) has […]