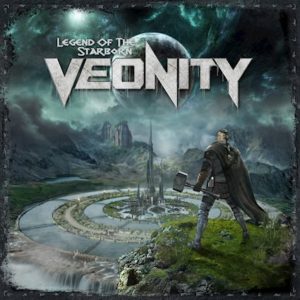 We first introduced you to Sweden’s Veonity in summer 2017 while covering Sweden Rock Festival. (See the interview with Samuel Lundström here) This band caught my attention with their classic power metal sound and I’ve keep an eye on them since. I am happy to tell you they are back with new music! Veonity Legend of the Starborn is set to release November 27th via Sliptrick Records.

I’ve had a copy of the album for the past week and have been playing it constantly. It’s glorious! From the opening intro on “Rise Again” I could have sworn it was old school Helloween mixed with some Gamma Ray. I instantly rejoiced at the true power metal feel exuding through my ears! The lighting fast riffs matched by insane bass and drum tempos, make this track huge! There’s also a slight hint of Gothenburg’s Manimal sound in this track that I completely enjoyed! But rest assured, Veonity‘s familiar sound of legendary bands is just a part of their sound. These guys have put their stamp on their sound that makes them stand out as being Veonity.

The album isn’t all fast riffage either. There’s a number of slightly slower tempo tracks that allow you to truly hear the versatility in their sound. You will hear the skill in the instrumental performance as each track unfolds. It’s all paired to the great vocal range, tone and control Anders Sköld has in his vocals. The album features guest appearances from Tommy Johansson (Sabaton, Reinxeed) and Patrik Selleby (Bloodbound, Shadowquest). The writing also tells the listener a story throughout the album.

The band explains in further details the story of ‘Legend Of The Starborn’:

“A sequel to Into The Void. Arriving in the age of Vikings, the Hero discovers that the technical progress that killed the Earth started when the Vikings vanished. An alien race called Atlantis came to Earth with inventions and technology, but began to enslave mankind. The Hero leads the last remaining Vikings on a quest to save humanity.”

Something else that really stood out on this album to me, it’s singable. For me that’s a huge plus. I love to sing along to a great album and with ‘Legend of the Starborn’, you can do just that.

My verdict on ‘Legend of the Starborn’… After listening to this album for a good week in multiple ways; earbuds, house stereo and in my car, it’s hot pick! I suggest that you get this one for your collection. You are going to hear many great elements in this album that just keep coming. Pay attention because you will find yourself saying, wait, what was that. Then going to back to hear part of an arrangement again. I did this on “Gates of Hell”. It has this almost Satriani style of playing that was really cool mixed in their sound! I really enjoyed this album. Definitely one I will be playing for a long time to come.

Veonity Legend of The Starborn Tracklisting:
Rise Again
Starborn
Guiding Light
Winds Of Asgard
Outcasts Of Eden
Sail Away
The Prophecy
Warrior Of The North
Gates Of Hell
Freedom Vikings
Lament
To The Gods
United We Stand
Beyond The Horizon (Bonus Track)

‘Legend Of The Starborn’ will be released on CD and digital formats worldwide via Sliptrick Records with pre-order available here.

Check out the first single Guiding Light that was just released today!!

Sons of Texas Debut New Song “Down In The Trenches”, ‘Forged By Fortitude’ Due Out September 22

September 18, 2017 Diane Webb
Help Get The Word Out By Sharing This With Your Friends

Help Get The Word Out By Sharing This With Your FriendsConnecticut ‘s leading metal band, […]