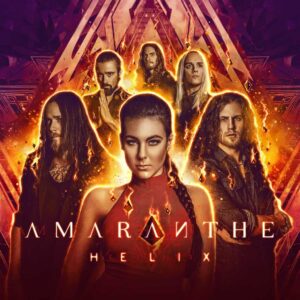 I wondered this past year what the new Amaranthe album would sound like with Jake E officially parting from the band. Well, I now have my answer! Amaranthe Helix is set to release this Friday, October 19th and WOW is it great!

Last year we caught Amaranthe on tour in the USA and Smash Into Pieces vocalist, Chris Adam Hedman Sörbye, stepped in to help with vocals. Then later the world found out that Dynazty‘s Nils Molin was selected to step in as the new vocalist. Molin joined the vocal ranks with Elize Ryd and Henrik Englund Wilhelmsson as the male clean vocalist.

At first I was unsure if I would like the addition of Molin to Amaranthe. His vocals are a bit different than Jake E’s, so it had to be a wait and see. Then a few months back Amaranthe dropped their “365” single and the waiting was over. I honestly have to say, I wasn’t convinced on Nils Molin from this single. His work with Dynazty has shown how well he stands on his own as vocalist. I wasn’t convinced he fit the 3 singer set up of Amaranthe. That was until today as I listened to Helix.

In “365” his vocals seemed to get a little lost, but as you progress through Helix, there’s more room for Molin. By the end of the album, I was convinced he was the right pick for next generation of Amaranthe.

So what about the album itself? Well, writing has never been an issue where Amaranthe is concerned. That’s something they completely have down. Helix shines! Every member of the band has a unique fit and all together, it’s magical.

There’s a great mix of the pop metal sound that fans have grown to love. Fast and slow tempos as the tracks progress. A good mix-up of clean and screaming vocals. Elize Ryd gets shows off her sultry, smooth, powerful and intense vocals as much as Henrik Englund Wilhelmsson gets to scream to his hearts content. Then Molin adds in his fresh vocals. The melodic blend between this mix of vocalists, is pure bliss.

They’ve also added fun tracking/sampling into the instrumentals that often sound a bit futuristic. Familiar enough for fans to connect the new album to the old albums. Yet, it’s fresh and taking the next step in Amaranthe‘s growth as a band.

When it comes to guitars, Olof Mörck goes big and bold, and that’s very welcome! As far as the rhythm section of bass and drums, neither are just background noise. There’s a lot of unique drumming going on as well as bass riffage that pulls the full Amaranthe sound together. I expected nothing less from Mörck, Johan Andreassen (bass) and Morten Løwe Sørensen (drums). They’ve been an integral part of the music!

All in all, this album rips! I am thrilled with Helix! This has something for all the fans. It’s larger than life and full of crazy energy. I say, run out and grab this one on Friday!!

Now, we just have to wait for a new tour to head our way here in the USA!

December 18, 2018 Diane Webb
Help Get The Word Out By Sharing This With Your Friends

Help Get The Word Out By Sharing This With Your FriendsPhoto Gallery: –  Cane Hill […]

January 13, 2017 Diane Webb
Help Get The Word Out By Sharing This With Your Friends

Help Get The Word Out By Sharing This With Your FriendsJanuary 13, 2017 Frontiers Music […]

December 9, 2017 Diane Webb
Help Get The Word Out By Sharing This With Your Friends

UNTIL RAIN to Release “Inure” Via Sensory Records

Meshuggah Perform To A Sold Out Crowd In Seattle