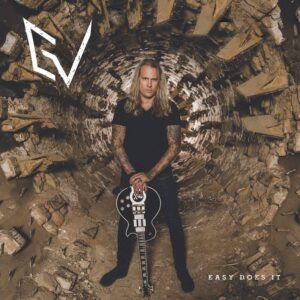 Have I got a great album for the music fans who love guitar albums. I am sure if you’ve followed our site you’ve seen our coverage of guitar greats Steve Vai, Yngwie Malmsteen, John 5, and the Generation Axe tour. Well let me toss another amazing guitarist into the mix today with Euge Valovirta and his solo release ‘Easy Does It’.

If you don’t know the name,  you most likely know some of his work. Valovirta‘s been playing for a very long time and is undeniably one of the best guitarists to ever come out of Finland.  He has performed with numerous bands over the years; Children Of Bodom, Heavysaurios, Kiuas and many more. As a regular member, has also been a part of the bands Godsplague, Drive, Suburban Tribe, Shining and as of late, Cyhra. So as if he hasn’t been burning the midnight oil already, now he’s got his own release out and it is a banger!

I dig a great guitar album. Actually, that’s probably an understatement! I grew up on many amazing axe slingers like Joe Satriani, Yngwie Malmsteen, Jimi Hendrix and Steve Vai, mixed with some blues guitarists like Buddy Guy, B.B. King and Stevie Ray Vaughan. I’ve always enjoyed sitting down and diving into the depths of an intricate album where an artist gets the opportunity to express themselves completely through their music. That’s exactly what has drawn me to the delicacies that can be found with many finely tuned artists who have crazy technical abilities.

When I sat down and listened to ‘Easy Does It’ for the first time, my jaw dropped as each song came along and the album progressed.  Having known of Valovirta‘s various shredding gigs in his career, I knew this would be something worth checking out. What I didn’t expect to find, were the amount of styles to enjoy through the entire album. That’s not saying I doubted his abilities, I just wasn’t sure what all he was throwing into the mix.

As singles started rolling out one by one, a number of samples were stewing through my mind. First came “Feed The Fire” (April), then “Liquid Lunch” (May) and “Triggered Boulevard” (July).  What was clear to me instantly, this wasn’t the typical guitar rock album. This wasn’t simply a shred-fest that would overwhelm fans who are on the lighter edge of the instrumental guitar rock that gets served up like a Las Vegas buffet on so many albums. No shit sandwiches here, this album is clearly something set apart from the rest and one that all fans can enjoy.

For me, one of the things that truly sets this album apart from so many guitar player solo albums is the inclusion of a good number of tracks that include vocals. For me that’s always a bonus. Don’t get me wrong, I can get down with a John 5 album just like the next guitar fanatic, but breaking it up and giving my ears some juicy vocals to enjoy too, makes these masterful tracks. This is the type of album I have been waiting for! And for the fans reading this, rolling their eyes and calling bullshit over any guitar album……. no, this album is that great and yes, you need to hear it!

So let me break it down for you. ‘Easy Does It’ has 10 glorious tracks. The album starts off with an instrumental track then flows into back to back tracks with crazy vocals as it rinses and repeats the hand off between pure music and the vocal mix.  As the vocals are thrown into the wicked, distorted and finger picking riffs it will make you question where this album has been all your life. It’s worth noting as well that being his solo album, Valovirta also gave room to all of the artists who worked with him to shine. No one took a back seat on this album, everything is intentional and authentic, making this album great.

It’s clear by the third track that Valovirta isn’t a novice at his craft, he’s seasoned, experimental, completely in control and clearly gets inspiration from many influences. There’s a lot of metal, some classic rock, blues, and even some crazy country hillbilly influences that are intertwined throughout. But that’s not even where I lost my mind, it was when the chicken pickin started in the metal mix he does. John 5 always blows me away with chicken pickin too, but now two of my favorites guitarists have taken playing to a new level of insanity. If you don’t know what chicken pickin is, just watch Euge Valovirta show you.

The transitions throughout many of the tracks will allow the listener to explore the boundaries that can and should be broken when writing music today. There are so many unexpected twists that I kept going to back to listen to them again. I thoroughly enjoyed the variety of vocalists that were invited to take part in this album. There is a great mix of vocal styles, some gritty, some high pitched wailing, and even the wicked, evil black metal vocals. But my bass lovers, don’t despair… there’s plenty of impact from the bass riffs through this album, strong, heavy riffage here all matched to lots of great drumming!

You can see I’ve mentioned John 5 numerous times, there’s a reason.  I’ve been leading up to Valovirta‘s obviously named track, John 5 (track 9). When you listen to it, you will instantly hear the John 5 feel, but from Valovirta‘s fingers.  Now I can say, I want to see Valovirta in costume like John 5 does when he performs! So up that game Euge, you’ve opened Pandora’s Box!

Lastly, the album wraps up with a Swedish track that’s dark and angry, fitting with Niklas Kvarforth on vocals for this track. I think this was the perfect way to wrap up the album considering Shining was a big part of Valovirta‘s career through the years before making his way onto Cyhra and onto this solo album ‘Easy Does It’.

Truly and enjoyable album. I think music fans will enjoy this one for a long time to come! You can grab your copy at iTunes, find it on Spotify and other places where music is sold. Buy it, don’t download it illegally.  Let’s make sure our artists are getting paid for their work!

April 12, 2017 Diane Webb
Help Get The Word Out By Sharing This With Your Friends

November 10, 2016 Diane Webb
Help Get The Word Out By Sharing This With Your Friends

February 5, 2021 Diane Webb
Help Get The Word Out By Sharing This With Your Friends