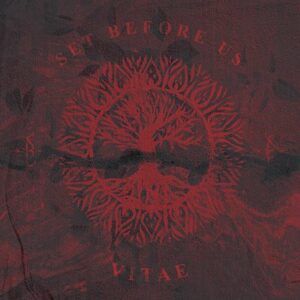 Hailing from the suburbs of Stockholm, Sweden, this metalcore band has a solid release coming.  It’s everything metalcore fans hope for in a new release! It’s raw and intense yet polished. The vocals are a mix of clean and screaming, with the screaming vocals being the clear winner, dominating the sound in a very good way. The technicality of the music is impressive, great guitar riffs, raging, blasting drum tempos, rhythmic and interesting to listen to.

The first four tracks seemed to be the warm up of the album. Slower tempos, less rage, it felt more like…. let’s ease you into what is about to come.

The songs that I thought worked best on ‘Vitae’ were “The Eternal Fight”, the best track on this album by far! It’s just full rage mode and the one that woke me up and from that point on I was looking for more tracks like this on the album. While I didn’t find another track I enjoyed as much as “The Eternal Fight”; “Everest”, “Ignite”, “Haven”, “Fountain of Youth”, “Oblivion” and “Charon”, which takes a bit to pick up, were pretty wicked tracks!

The song I really didn’t care for on this album was “Harbor”, it didn’t fit the album at all. This acoustic stripped down song, toward the middle of the album just felt odd in placement and like it didn’t belong on ‘Vitae’. Had it have been the last song on the album, as the outro, it may have fit the album better. Just really didn’t enjoy this one.

While I think this is a great album, there was really nothing new that other bands out there aren’t already doing. It’s a safe release, but nothing breaking Set Before Us out of the usual metalcore releases we are seeing come out today. That’s not a negative impression, just something to point out and that I hope in future releases they will take more risks in their sound to really put themselves outside of their comfort zone to create something insane that will stick out above everyone else in the genre.

On a side note, I have to bring this up. The one thing about that has been bugging the hell out of me about Set Before Us has nothing to do with their sound, but has everything to do with their image; button up long sleeve dress shirts, khakis and sweaters. What’s up with the “I just came from my office job” look?  Kind of like The Decemberists or Death Cab For Cutie tries to go metalcore, except both of these bands wear more black than Set Before Us does.

I was so into the sound coming from this album, but then I saw the videos for “Ignite” and “Avalanche” and was seriously saying “WTF is going on here?” Your sound is only one part of your band, the other is your image. This is metalcore, please ditch the uptight office look and look like you came ready to rage at your shows. This is not a trend I want to see coming to live metalcore shows. I don’t think I’d be able to get into the show and would just skip the show all together choosing to listen to the album instead. Sound and image go together, so please I beg you, ditch this in future videos and performances. Tusen Tack!

All that said, I think this is a great album and that metalcore fans should definitely pick it up!

For more information on Set Before Us, please visit them on Facebook or Eclipse Records.

May 4, 2021 Diane Webb
Help Get The Word Out By Sharing This With Your Friends

Hell In the Club – Hell of Fame | Album Review

September 9, 2020 Diane Webb
Help Get The Word Out By Sharing This With Your Friends

September 2, 2016 Diane Webb
Help Get The Word Out By Sharing This With Your Friends

Help Get The Word Out By Sharing This With Your FriendsLast Friday night, August 26, […]