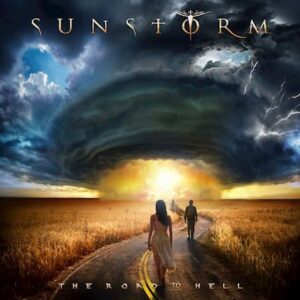 This is a lineup of musicians who can completely wrap you around their little finger. With the mixture of JLT‘s raspy melodic vocal tones, keyboards that blend through each track with the feel of an organ or traditional keys, wailing guitar riffs and intense tempos coming from the drums and the occasional heavy throbbing bass riffs, ‘The Road To Hell’ takes listeners through a nostalgic rollercoaster.

‘The Road To Hell’ is littered with one great track after another. Such great technical ability in each of these musicians shines through allowing the listener to sit back and digest the music as it unfolds before them. Thoughtful writing from the instrumental music to the lyrics delivers a solid release that was clearly not rushed and deserving of a public release.

The album has a great push and pull of fast tempo tracks and then slower tempo ballads that pull the listener back and forth in an emotional tug of war. As the album starts out with the first track “Only The Good Will Survive” on an upbeat tempo with tons of great organ sounding keys, the listeners will instantly get a taste of the rest of the album to come. The organization of the running order of the tracks will immediately suck you in and keep your attention.

One of my favorite tracks on this album is “My Eyes On You”. It gave me this feel of old school Survivor that whipped me back to the early 80’s. Joe Lynn Turner‘s vocals were truly channeling Jimi Jamison circa ‘Vital Signs’ (1984) on this track. It was really cool to hear that because of how much I really enjoyed that era of the band and to hear that in his own vocals was unique, giving me an instant love of this track.

My impression of ‘The Road To Hell’; it was written for fans of true melodic rock. It’s singable, melodic and will have the fans wanting to hear more when it ends. This album is definitely one for the music lover. I don’t think you can go wrong with adding this one to your collection! So go grab your copy today! It’s available now in CD and LP (Gatefold).

Road To Hell Tracklisting:
Only The Good Will Survive
The Road To Hell
On The Edge
Blind The Sky
My Eyes On You
Future To Come
Everywhere
Resurrection
Calling
State Of The Heart
Still Fighting

September 8, 2017 Diane Webb
Help Get The Word Out By Sharing This With Your Friends

At The Gates – The Nightmare of Being

July 1, 2021 Diane Webb
Help Get The Word Out By Sharing This With Your Friends

Help Get The Word Out By Sharing This With Your FriendsOhhhh the Gothenburg sound! What […]

June 22, 2021 Diane Webb
Help Get The Word Out By Sharing This With Your Friends

Interview With Zack David of Blindwish