Review and photos by Marvin Atwell.

June 16,  2018 – Journey hit the stage at Royal Farms Arena in Baltimore, MD. Opening up with their hit Separate Ways (Worlds Apart) and performing such hits as Be Good to Yourself, Open Arms, and Don’t Stop Believing. The show featured a drum solo by Steve Smith, a piano solo from Jonathan Cain, and a guitar solo from by the great Neal Schon.

Arnel Pineda was, as always, a ball of energy onstage. Running from side to side, jumping around on the stage, and playing to the crowd to get them going. The whole band – Schon, Valory, Smith, Cain and Pineda put on one fantastic performance that entertained for almost ninety minutes.

Co-headliner, Def Leppard, had a gigantic clock that counted down until the guys came on stage opening with a very high energy performance of Rocket. The crowd went crazy and everyone was up on their feet for the rest of the night singing such rock classics as Animal, Love Bites, Rock On (a cover of David Essex’s hit), and of course one of the greatest hits from the 80’s Pour Some Sugar On Me.

Elliott, Collen, Savage, Allen and Campbell didn’t hold anything back during their nearly two-hour show for the fans. Elliott was all over and played to the whole crowd to give them what they came to see, a kickass rock show! Collen poured his soul into his playing like he does every night and everyone loved it.

This tour just kicked off and is full swing now. Check the dates below and get out to see one of their shows, it’s one not to be missed. 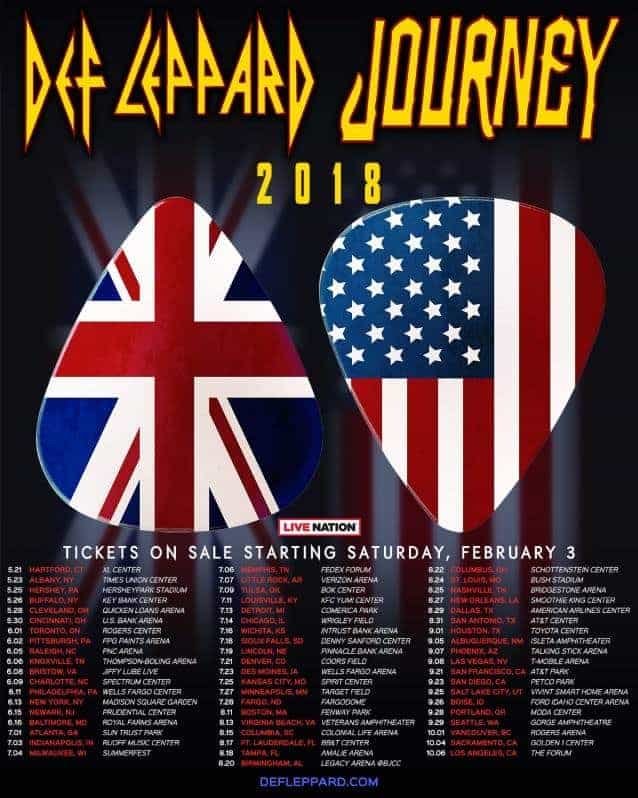 Journey, The Doobie Brothers and Dave Mason Perform at the White River Ampitheatre

August 29, 2016 Diane Webb
Help Get The Word Out By Sharing This With Your Friends

Help Get The Word Out By Sharing This With Your FriendsLegendary artists Journey, The Doobie […]