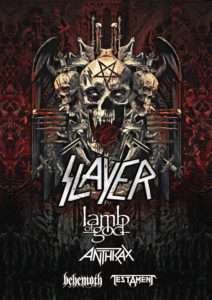 End Of Days Slayer Tour Comes to Vancouver, B.C. – When Slayer announced they would be retiring and that one last world tour was coming our way, deemed the End of Days World Tour, fans collectively starting mourning the impending doom to follow the loss of yet another pioneering force for metal music.

The lineup was announced shortly after and split over two North American legs and a European leg.  For the first leg, May 10 – June 20, the line-up was announced as Slayer, Lamb of God, Anthrax, Behemoth and Testament. The second leg, July 26 – August 26, where the line-up swaps out Behemoth and adds Napalm Death in their place. European tour dates are set for November 1 – December 8. The line-up for the European leg is Slayer, Lamb Of God, Anthrax and Obituary. As dates were announced and ticket sales started, one by one the first of the Slayer tour dates were quickly sold out leaving many fans scrambling to find the next closest show they could get to and grab tickets for. Still some North American fans have been left out because they were unable to secure tickets for this epic tour. The European tour, still being a bit further out, has some tickets still available but venues are starting reach the fatal ticket availability levels. So count on the rest of the tour to sell out in the near future and if you’re in one of these cities and do not have a ticket yet, get one soon or face the possibility of not getting a ticket to the show.

I caught the Slayer tour on May 16th at the Pacific Coliseum in Vancouver, B.C. This was a proper venue for this kind of show. A nostalgic venue that I haven’t been in since the 80’s when Whitesnake performed a massive show during the height of their monstrous career and many other greats have performed in over the years. As I arrived to the venue, I was quickly surrounded by “my people” as the other fans in line would randomly start the solo battle cry of “SLAYER” at the top of their lungs only to be met by an overwhelming, loud and in unison response of “SLAYER” that would take over the grounds and echo around the venue.  There are very few bands that can inspire their fans in this way.  Although alone in line, by no means was I or anyone in line this day alone. We all came with great anticipation and sadness to witness one of our lords of Thrash Metal extinguish their flame one last time.

As I stood in line I chat with other fans about the first time they discovered Slayer and for many of the fans it was many years ago, back in the 80’s but just as many younger fans who’ve also found their way to Slayer’s music through the years. Music that is classic, yet a pioneering force in Thrash and is still as relevant today as it was when first released. Music that has spawned many musicians throughout the years. Slayer will be greatly missed by the thousands of us who love and idolize them. They will still inspire listeners to pick up an instrument and join the music scene as younger generations find their music and get the same inspiration so many before them have already found. So it has left me wondering, how do we as music fans, who’ve enjoyed Slayer all these years, ever say thank you enough for all of the music, inspiration, misspent youth that happened with Slayer as the soundtrack to our lives and for their unwavering force in a genre that’s often overlooked and shunned by the mainstream. I don’t think we can ever say it enough, but I say it now and know that the fans who were with me feel the same, THANK YOU Slayer! You’ve given us all so much and we truly appreciate it and appreciate that you’re giving us one last tour to enjoy, connect and say our farewells.

Onward to our live coverage. This night was packed full of some of the most amazing music you could possibly get in one night at one show.  Head-bangers and mosher reveled in the pit the entire night. As soon as the show started, the first of the body surfers was floated up and over the barrier, clearly showing security they were set for one insane night ahead.

Bay area thrashers, Testament kicked the show off. Founded in ’83, these guys are part of the genuine old school thrash mecca. These guys know how to get the fans riled up and the pit opened up just about the same time the show started. Fans came ready to rage the night away and Testament answered their angst with full aggression. What a way to kick of the night of metal mayhem that was to follow.

Second up for the night, Polish metal outfit, Behemoth!. I hadn’t had the chance to see this band live before this show and I have to say, I believe an arena show was the ultimate way to experience them live for the first time. Their music alone is larger than life and added with a full stage show, WOW! These guys were amazing!  Insane live show and fans couldn’t have asked for a better live experience than in full glory with great lighting!  I did find out at this show that Behemoth! has a MAJOR North American headling tour coming later this year, watch for that announcement to come soon and make sure to get out and support their tour.

Ahhhhh the next band, Anthrax!  These guys rocked the house.  Fans were already supercharged from the first bands and the anticipation of the rest of the evening. All the guys had to come out and do was what they always do, kick some ass. That’s exactly what they did. I’ve seen Anthrax live many times before and they always do a great show and fans always rage and open a pit. This show was no different. Fans were having a great time and Anthrax raised the level of excitement. These guys have been putting out music since the early ‘80’s in NYC and their name comes up often in any thrash conversation that includes the pioneers of thrash metal. They’ve been paving the way for many aspiring music fans who’ve become musicians from the love of their music. They just put out a live DVD ‘Kings Among Scotland’ in April that’s pretty rad and worth picking up and thrashing along with the live fans! I chat with Charlie Benante a couple days after the show about the music as well as other projects and asked if Anthrax is planning to retire, you can get the answers here. Anthrax will be doing some off day shows through the Slayer tour with Testament on some shows and Lamb of God on others so make sure to check their page for those special shows. They are doing some old material they haven’t done before so these shows are going to be a lot of fun!

Lamb of God, what can one say about this band?  Other than the fact that they completely raged and pulled the fans into insanity mode…. These guys put on one intense show. Randy Blythe raged across the stage and seriously left his last ounce of energy up on that stage. His high energy running back and forth across the stage and jumping through the air brought loud cheers from the crowd. Added to that were the h2o cannons spewing bursts of fog into the air as the lights went from low and dark to somewhat bright bursts interchanging throughout their show. Fans were pressed into the barrier with arms raised high and head-banging while a massive pit was opened on the floor behind them as the rage filled the venue and moshers were slamming in every direction as more and more crowd surfers where coming over the barrier toward the stage and every fan that made it over was filled with joy and excitement to have made it forward as they were escorted back into the audience. Talk about lighting the final fuse before Slayer took the stage!

Last up for the evening, the reason all the fans were there in full force, SLAYER! The stage was covered by a massive black curtain displaying SLAYER across the front. Just before the curtain dropped, giant metal displays with Slayer on them were engulfed in fire and flames, then the curtain dropped. The band were already on stage and ready to lay waste to every last person in the building. Massive flames were set off across the back of the stage throughout the set as fans screamed and cheered and the energy in the venue continued to explode. It goes without saying, the floor pit was massive, insane and full of rage.  Fans were intent to get their last bits of angst out for the evening and there was no better way to do it than set to the music of Slayer, live, one last time. The band put on a larger than life show that had an impressive stage show and music to match.  Fans heard many of their favorite songs for the last time and as the evening came to a close, fans left completely exhausted. This was definitely a tour worthy of being called the End of Days. Slayer’s not holding back on this final tour and this will be one to remember for the years to come for all of the fans! I hope you all have the chance to see this tour!

Check out our massive live Slayer End Of Days Tour photo gallery from the show here.

March 13, 2018 Diane Webb
Help Get The Word Out By Sharing This With Your Friends

March 12, 2018 Contributor
Help Get The Word Out By Sharing This With Your Friends

March 29, 2018 Diane Webb
Help Get The Word Out By Sharing This With Your Friends

Help Get The Word Out By Sharing This With Your FriendsSLAYER ANNOUNCES THE REPENTLESS 6.66-inch […]

New Video: Revolverlution – Going Out With A Bang

Rise Against Mourning In Amerika Tour Comes To Seattle