On Friday, May 11, 2018 my adventures took me to Dallas’ very own House of Blues, (co-owned by Blues Brother Dan Aykroyd). The agenda for the evening was centered around the J-Pop metal sensation, Babymetal!

I arrived to the venue a couple of hours before doors were set to open to get the low down on everything planned for the show. To my surprise, the line for will call was already around the block. After talking to the attendant at the box office, I found out the show had sold out in less than an hour earlier this past Spring. I knew something special was about to happen. After getting a bite to eat, I made my way to the back of the line so I could grab a hold of the vibe from the fans. To put it in words, the crowd had a mixture of a diehard fanaticism blended with a comic con vibe. 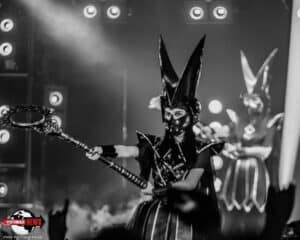 Cars were driving by blaring Babymetal as loud as possible. The fans were cheering with each other and giving out high fives. The time had come for us to head inside. I went through the security check and proceeded towards the venue doors and see what the band had coming for all of us this evening. Shortly after the lights faded down the supporting band Skyharbor took the stage. I stood there for a minute taking in the rhythm of the lighting and appreciated the collaboration of the whole band between each song. They gave me a Team Sleep vibe but with more guitar. I thoroughly enjoyed their set and look forward to seeing them again in the future.

This was my first experience seeing Babymetal live, and I was quite excited to see what was about to unravel before me. I did a little bit of research going into the night. Japan is notoriously known for its “idol” culture of cultivating from today’s youth and making them into pop sensations. Somewhere down the line, this evolved into the J-Pop metal mayhem we know as Babymetal.

As my anticipation was at its peak, the lights began to fade dark. As the tribal-like thumps rang out, Babymetal started to take the stage. One thing was clear; this was not just a metal show but a full-on theatrical performance. It was a fully immersive display, with the Kami Band depicting the newest page in their story. A story that is centered around seven “chosen” apostles of metal who are satisfying the prophecies of an obscure creature known as the “Fox God”. These are accomplished by Babymetal through choreography, ensembles and many other production details that managed to stun at every turn.

The fans were so filled with excitement as they tried to open a mosh pit, but were so enticed by the theatrics of Babymetal‘s stage set that they could not maintain a solid pit without having to stop every few moments to watch the stage.

The group ran through a great mix of songs from BABYMETAL (2015) and Metal Resistance (2016). The Kami Band trounced away with magnificent accuracy as Babymetal rocked, harmonized and executed karate in unison. It was a well-polished and adrenaline-pumping effort. However, more than just powerful and brutal on songs like “GJ” and “Megitsune”, the performance was a bit emotional too. Su-Metal offered up a perfect vocal display during the song “Akatsuki”, with blue lights and haze it molded the tone of the venue into a captivating moment.

As a first timer at a Babymetal show, I was not exactly sure what to expect. If you’ve ever watched any of their performances from Japan, you will understand why I was not sure where it would go. I honestly have to say that the group has not only soared above my expectations, but there are not very many metal bands who could even come close to the efficiency and production value that goes into their set. Metal is just the conduit that the band’s music resides in. They raise the bar above the stigma of the typical metal doom and gloom. Babymetal instead resonate depth and growth while singing songs about waking up, karate, and chocolate. They are doing something that has not been done before by tearing down some of the social walls that metal has set up around itself.

If you ever have the chance to see Babymetal, make it a priority. It will leave a lasting impression on you.

Babymetal Setlist:
In The Name Of
Distortion
Elevator Girl
Tattoo
GJ!
Akatsuki
Megitsune
Chocolate
Karate
Road Of Resistance
The One

About Tracy Fuller 29 Articles
I love music, I love crowded venues, loud music, and sweat-soaked fans. I love the sound of a venue opening its doors to the public. I ended up moving to the Austin area in 2011. I have nearly a decade of experience in the Entertainment & Private Event industries. I have supervised at a number of concert venues and festivals, such as Emo’s East, Stubb’s, ACL Festival, Bonnaroo, Austin Fan Fest, SXSW, and the Austin Trail of Lights. In 2014, I began to take an interest in all things media related. I ended up chasing those ambitions and became a content creator and a concert photographer. With no formal training in any of those areas, in 2017 I decided it was time to change that up. I decided to pursue a degree in the Arts focusing on Radio, Television, and Film. As I began my academic path, I inquired about the Media department. I currently am a multimedia journalist for the Student Life department at ACC. To further my education, I received a scholarship with the Austin Film Society to become a TV Producer at Austin Public Studios. I believe in capturing the essence of life and representing it in a creative effort.

KAABOO Texas Music & Art Festival Heads to Dallas in May!

April 24, 2019 Tracy Fuller
Help Get The Word Out By Sharing This With Your Friends

May 1, 2019 Tracy Fuller
Help Get The Word Out By Sharing This With Your Friends

Anti Flag Comes To Austin With A Message Of Unity

February 6, 2018 Tracy Fuller
Help Get The Word Out By Sharing This With Your Friends

Help Get The Word Out By Sharing This With Your FriendsPittsburgh punk rockers, Anti Flag […]