The Judas Priest Firepower Tour 2018 made its way to the Seattle area last week support of Judas Priest‘s 18th album release,‘Firepower’,that was released on March 9th.

Judas Priest has long been one of the pioneers in the British Heavy Metal scene and has had tremendous world-wide success throughout the years. Weeks before the band kicked off the North American tour a sad announcement was made that Glenn Tipton would not be playing on the tour due to his diagnosis of Parkinson’s disease that has slowed his ability to tour like he used to. It was announced that in his place would be Andy Sneap, a well-respected musician and producer who not only just produced Saxon‘s newest album, ‘Thunderbolt’, but Judas Priest‘s very own new release, ‘Firepower’! With huge shoes like those of Tipton‘s, the band made the perfect choice in his tour replacement.

Fast forward to April 15th to the Kent, WA show, just outside of Seattle, and fans of all ages arrived in full force to the sold out show to rock out to a trio of iconic artists for one glorious evening of rock and metal. On this tour Judas Priest has had fellow British Heavy Metal pioneers, Saxon and a newer rock band, Black Star Riders who came from Thin Lizzy and their legacy. Fans couldn’t have asked for a better line up to rock the evening away with. I could not simply do a single blended review of these 3 bands, so let’s get to the run down of the Judas Priest show here and you can check out the reviews of Saxon and Black Star Riders, plus an interview with BSR‘s Ricky Warwick on our website soon.

The evening was fired up long before Judas Priest hit the stage but it was clear as they hit the stage that the fans were not going to settle down, take their seats and simply watch the show! The fans were rowdy and ready to rock. There were not many fans in their seats this evening, most everyone was on their feet through the entire Judas Priest set. As the evening kicked off, Rob Halford hit the stage in shiny, metal studded jacket with tassels, shiny pants to match, studded leather gloves and sunglasses. As he turned around, fans cheered to see the ‘Firepower’ logo the back of his jacket. Throughout the evening he had a few wardrobe changes, but when you are Rob Halford, nobody cares, he’s welcome to swap his wardrobe as many times as he chooses and it’s always something even better than the last! 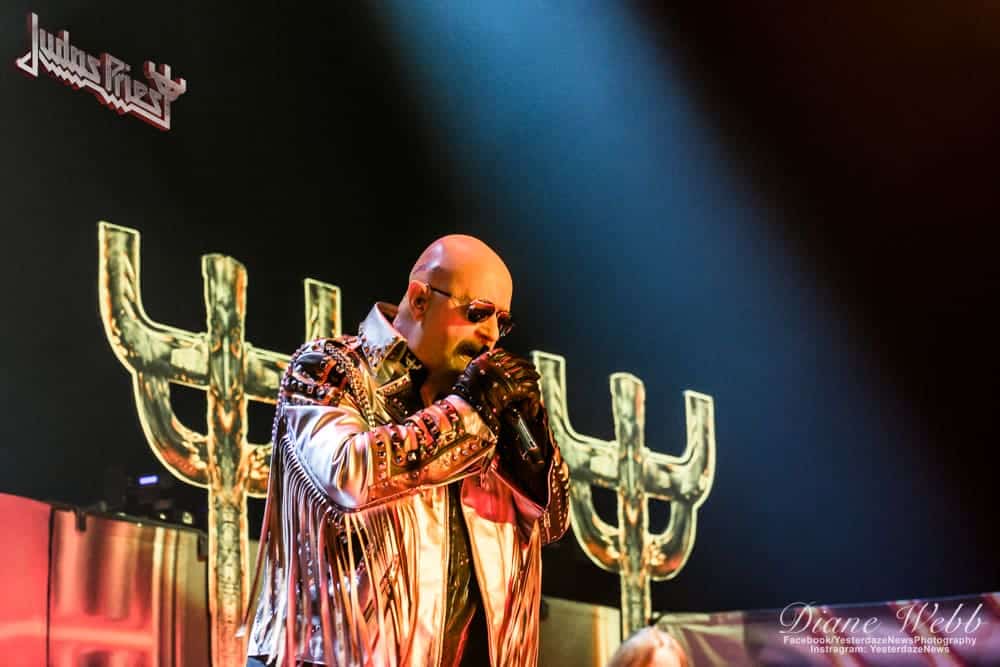 Judas Priest started their show off with the title track “Firepower” from their latest album and then took their fans on a joy ride through their catalog of classic metal hits and a few songs that were a bit more obscure. All the touring members of Judas Priest rocked the house and showed off their amazing musical talent. It was clear which songs fans had attachments to as the crowd roared at the beginning of each new song on the setlist for our show, but one clear moment was of course as Rob Halford rode his bike out onto center stage with a riding crop between his teeth. Fans roared loudly as they new it was the start of “You’ve Got Another Thing Comin”.

For me personally, it took me back to my first Judas Priest show ever. It was in Seattle during the late 80’s at the Coliseum (now the Key Arena) when they toured with Slayer as their opening band! That was my first live taste of both bands and as luck had it, I got hang side stage with Tom Araya himself during Judas Priest‘s set and still remember to this day the feeling of Halford firing his bike up and pulling it on the stage, being in an earthquake zone, my first thought was that it was an earthquake, but nope it was just the most amazing metal vibration imaginable permeating through the stage! The way the stage rumbled will be a moment I will never forget and has placed both bands in my metal heart forever!

The band ended the their main set with “Hell Bent for Leather” that once again had fans cheering and singing along with fists raised high in the air. Then off the stage the band went. 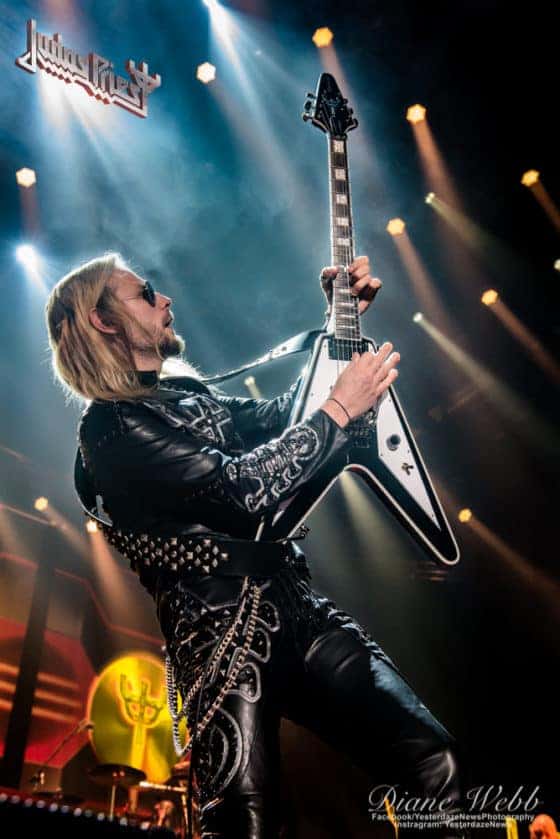 As fans stood cheering for an encore, of course they knew once had to be coming since a number of larger hits had yet to play, they never expected what was to come as Judas Priest took to the stage for their encore, neither was I! Glenn Tipton walked out onto the stage and fans throughout the Accesso Showare Center collectively lost their minds! Some fans, including myself could be seen to have a few tears in their eyes as we all thought we’d never have this opportunity to see Glenn Tipton perform live before us again. The admiration between fans and Mr. Tipton was heartwarming! If he ever had any doubt about the fans love, he no longer did after hitting that stage! What unfolded next were 3 glorious final songs for the evening that took the show completely over the top. 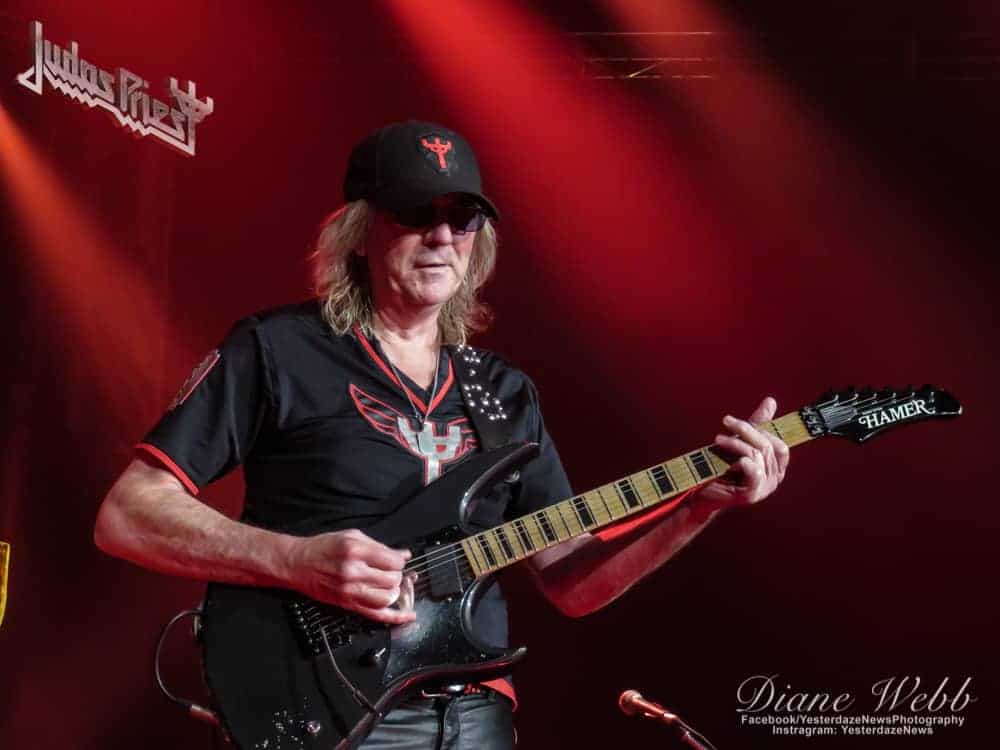 Seattle was rocked out of their minds this evening and it won’t be a show that’s easily topped here anytime soon! If you get the chance to catch this tour in its last few dates, do it!

Judas Priest will be hitting Europe next and some select festivals too! We will be bringing you more coverage from their performance at Sweden Rock Festival in June and I for one am hoping that Glenn Tipton will make another appearance for that show! We have live photos below, including Glenn Tipton!

Outro:
We Are the Champions (Queen)

October 23, 2017 Diane Webb
Help Get The Word Out By Sharing This With Your Friends

Help Get The Word Out By Sharing This With Your FriendsJudas Priest, Saxon & Black Star Riders announce 2018 […]

Judas Priest Brings The Firepower To ACL Live In Austin

May 31, 2019 Tracy Fuller
Help Get The Word Out By Sharing This With Your Friends

12 New Songs to Break the Back to Work Blues!

January 6, 2018 Diane Webb
Help Get The Word Out By Sharing This With Your Friends