Dark Funeral 25th Anniversary Tour Comes to Seattle – Who doesn’t love something dark, evil and theatrical?  There’s just something extra appealing when bands like Dark Funeral come to town for a performance that fans do not want to miss out on. It’s an evening to get out, go mental and lose yourself in the music.

Sweden’s Dark Funeral has been making Black Metal since 1993 and have become a mainstay to many fans of the genre. When Dark Funeral announced in December 2017 that they were hitting the road on tour with Septicflesh and Thy Antichrist celebrating their 25th anniversary and that the tour was coming to North America, fans across the region were thrilled.  It had been a long 5 years since the last time we had seen them here. This announcement was bittersweet as it came on the heels of them announcing a line up change in November as Dominator (Drums) was set to take leave from the band to address personal matters.  Never the less, the show would still go on and the band locked in a replacement to cover the skins.

Even before the full band hit the shores of North America, Lord Ahriman was in town checking out winter NAMM 2018. I had a chance to catch up with him in person to chat just about a month before the tour kicked off.  Just listening to him talk about getting back out on the road, I knew that this would be a show I had to see. You can hear what we talked about here.

Fast forward to February 27th at Seattle’s Studio Seven, Dark Funeral came to lay waste to the Seattle fans in a night of pure evil.  The band took to the stage led by Lord Ahriman and there was a shift in energy throughout the venue.  Fans in every direction pushed closer to the stage and started losing their minds as the music took over. The darkness had arrived and fans where ready to worship!

The band had a nice long set and played many fan favorites throughout.  Some fans were so possessed by the performance they dared to jump on the stage with the band.  The look of disdain was clear on Heljarmadr‘s face as he looked at each person who dared to get in his way as if they were forever cursed.  The need to have a moment of evil release and make a sacrifice came as one fan over stayed their welcome (really, not welcomed to begin with) on the stage and Heljarmadr extended both arms straight in front of him has he charged and tossed the disorderly fan off the stage and into the crowd below that a was so tightly packed they surfed the fan to the back of the audience. I’ve honestly never laughed like that at a metal show before! Be warned fans, you ARE NOT welcome on Dark Funeral‘s stage during their performance. You may become the next sacrifice!

The band wrapped up the first part of their set with “My Funeral” off of their 2009 release ‘Angelus Exuro pro Eternus’.  They took leave of the stage briefly as fans cheered and chanted for them to return.  The fans got their wish as Dark Funeral returned to the stage for an encore that consisted of “Nail Them to the Cross”, “Atrum Regina” and “Where Shadows Forever Reign”. Another amazing Dark Funeral show in the vault! You have to get out and see these guys perform live. 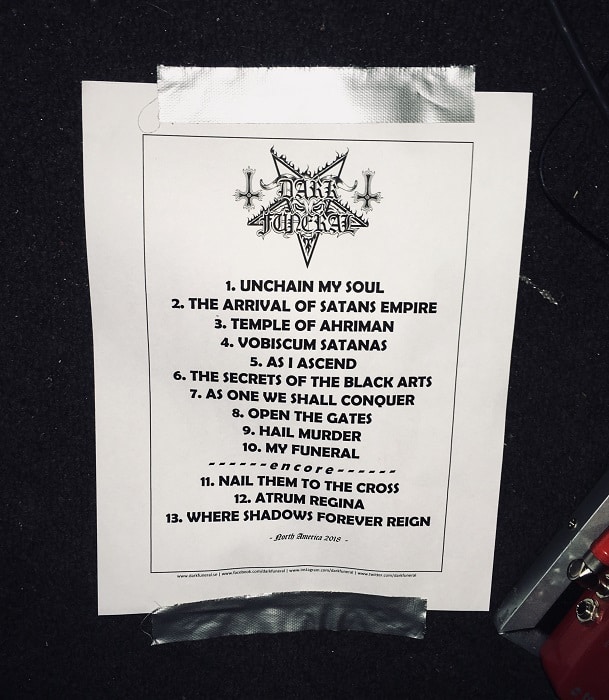 Check out more of our concert reviews here.

March 17, 2022 Diane Webb
Help Get The Word Out By Sharing This With Your Friends

June 12, 2018 Diane Webb
Help Get The Word Out By Sharing This With Your Friends

February 2, 2018 Diane Webb
Help Get The Word Out By Sharing This With Your Friends

Meet “V” of the Glam Skanks; We’re Talking Music and Hitting the Road With Adam Ant