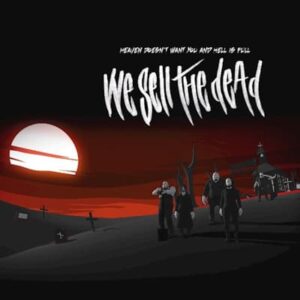 What would happen if classic heavy metal met Victorian times? The answer; ‘Heaven Doesn’t Want You and Hell Is Full’.  A dark, eery and ethereal album full of unexpected musical elements.

When We Sell The Dead set out to explore what would come from mixing Victorian times, the darkness of Jack the Ripper and heavy metal, I am not sure they even knew where it would lead them other than to something different. Where it led them resulted in something absolutely devious and delicious for music listeners to sink their teeth into.

The band, comprised of  Niclas Engelin (In Flames, Engel), Drömriket’s Jonas Slättung, Gas Lipstick (ex-HIM), and the voice of Apollo Papathanasio (Spiritual Beggars, Firewind), found a way to put a new twist on the heavy metal genre in a way that allowed them to explore the stories of horror and misdeeds from different angles and infuse the music in a new way.

The subject matter of each song allows the band to push each track to the far limits and experiment with different styles of performance that you wouldn’t expect traditionally in classic heavy metal.  There’s an embodiment of freedom of expression blended cleverly with atmospheric riffs as well as vocals that lend a bit of distortion to the music that gives a feel of another time and place.  Waining vocals transport the listener into a different era and pull the listener into the music to do more than just listen, but to feel the music that surrounds them.

I really enjoyed this album from the first to last track.  The different take they took gave me something new to really listen to and absorb.  I think music fans will appreciate what We Sell The Dead did on this album.  It’s creative, evolved and musically fortified with honest and great music.

June 17, 2018 Diane Webb
Help Get The Word Out By Sharing This With Your Friends

Eyes Wide Open – The Upside Down

May 17, 2019 Diane Webb
Help Get The Word Out By Sharing This With Your Friends

Help Get The Word Out By Sharing This With Your FriendsEyes Wide Open Album: The […]

Daze of Summer: Enter Your Band to be Featured!

DETH BY AUDIO Release Video for Know Their Blood