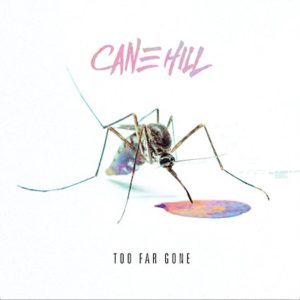 Cane Hill has come out swinging with ‘Too Far Gone’. An album full of acid trip induced music that’s crazy intense and will have even the most relaxed listener up on their feet wanting to jump the pit. But also, leaves me questioning what the hell is going on down in Louisiana!

I’ve been sampling the slow release of tracks from Cane Hill over the past few months and with each release my inner rage began to scream loudly to be let out.  There’s just something extremely raw and intense about the tracks off of ‘Too Far Gone’.  They reach deep down inside of you and pull on the rage and angst that’s been suppressed by the day to day life in today’s world.

The not so advisable and experimental way that Cane Hill wrote this album (pushing the boundaries of life with no limits, illicit drug use, etc.) gave way to music without boundaries. It also connects living life to death, no matter how you choose to live it. I heard so much rage in this album that I could connect to, that listeners can also connect to.  Songs like “Scumbag” and “Hateful” felt heavy as hell, the deeps growls in the vocals only added to the dark feeling of hate and intensity.

The last track of the album “The End” puts a wrapper around this entire album.  Front to back, this is a killer album that will have listeners pausing to listen to the music, the lyrics and think about what Cane Hill laid before them. Such heavy intense riffing, then spaced-out riffs give a feeling of intensity and dream like moments throughout the album.  One minute it’s super heavy, distorted and rapid, the next unwinding and off time.  The guys did a great job exploiting their writing style on this album and proving there’s always another option in music.

I loved this album.  It’s got a little something for every metal fan out there.  I definitely suggest picking up this album if you want to experience something intense and a little different in hardcore.

Tracklisting:
Too Far Gone
Lord Of Flies
Singing In The Swamp
Erased
Why?
It Follows
Scumbag
Hateful
10 Cents
The End

Ektomorf – Warpath (Live and Life On The Road) | Album Review

August 25, 2017 Diane Webb
Help Get The Word Out By Sharing This With Your Friends
more

Help Get The Word Out By Sharing This With Your Friendsmore Ektomorf Album: Warpath (Live […]

January 26, 2021 Diane Webb
Help Get The Word Out By Sharing This With Your Friends
more

Help Get The Word Out By Sharing This With Your FriendsmoreConnecticut ‘s leading metal band, […]

January 20, 2021 Diane Webb
Help Get The Word Out By Sharing This With Your Friends
more