Following the successful launch of their debut single ‘Footprints’ and their first US tour, The Fell are thrilled to announce the addition of former INXS front man JD Fortune to their already strong lineup. 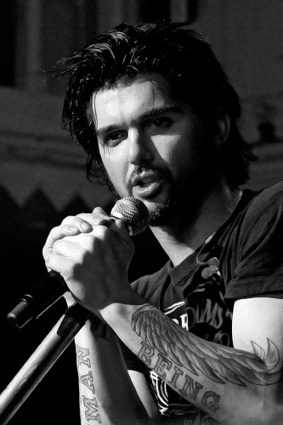 JD made a name for himself back in 2005 on the hit TV show ‘Rockstar: INXS’ where he was handpicked and chosen to be the new face for iconic rock band, INXS. During his time with the band, he wrote the multi platinum selling hit ‘Pretty Vegas’.

2011 saw JD’s official departure from the band after a long battle with personal issues. Now, he’s back in the game and fighting strong as the new lead vocalist for The Fell.

“It’s no secret that my story is one of highs and lows. I’ve had some incredible experiences and just over 11 years ago, my biggest low. I was battling addiction and depression and it was the toughest fight I’ve ever experienced in my life. The hardest part was admitting to myself that I needed help, and asking for it. It was a tough road to recovery, but I can proudly say that I faced my demons and won. Sadly, this isn’t always the case for everyone in my situation. That’s why I’m happy to talk about it. If my experiences help someone else in facing the same battles, then being open about it was worth it.

Regarding The Fell, Mike and I have been friends for a while and he mentioned he was looking for a vocalist. I jumped at the chance, I feel it’s the right time for me to really get fully submerged back into my music. We have already been writing and recording new material for the upcoming album. I’m really excited, the songs are awesome!” – JD Fortune

Mike Krompass adds “It’s really exciting to have JD in the band. The new material is really strong and we have even been writing with legendary song writer ‘Desmond Child’ on a couple of tracks and will be releasing our new Single in the upcoming months. There’s so much going on behind the scenes at the moment and we can’t wait to share it with our fans!”

The Fell will also be appearing at NAMM later this month so don’t miss your chance to catch them!

Interview with Billy Sheehan on The Fell, and His Other Projects

February 4, 2018 Diane Webb
Help Get The Word Out By Sharing This With Your Friends

February 7, 2018 Diane Webb
Help Get The Word Out By Sharing This With Your Friends

Help Get The Word Out By Sharing This With Your FriendsPhoto Gallery: Wednesday 13 live […]

February 7, 2018 Diane Webb
Help Get The Word Out By Sharing This With Your Friends

Help Get The Word Out By Sharing This With Your FriendsPhoto Gallery: Edge of Paradise […]

Mike Tramp – Everything Is Alright

Wacken Open Air 2016 – How to Interact With W.O.A When You Can’t Be There in Person

LOCASH CELEBRATES FIRST CMT MUSIC AWARDS NOMINATION FOR ‘DUO VIDEO OF THE YEAR’ FOR THEIR NO. 1 HIT SINGLE “I KNOW SOMEBODY”

Album Review: Wayward Sons “Ghosts of Yet to Come”