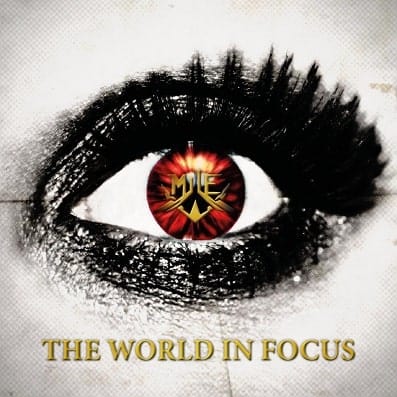 So the guys over at Mile linked me up with a copy of their upcoming album ‘The World In Focus’ about a week ago to check out and I have to tell you, I think I’ve just found my newest favorite band! I’ve tried this album out in many places to see how the sound changes.  I’ve listened in my car, through my headphones and over my stereo speakers at home and one thing resonates through all platforms, this album screams to be played loudly!

I haven’t been able to stop listening to this album, it is that good. Everything about this album is completely solid! Such a well written, performed and produced hard rock / metal album. All throughout this album I heard influences of some great bands that I’ve enjoyed for some time that come together in their own unique sound.  Some of the bands I identified in their sound were Alter Bridge, In Flames, Avenged Sevenfold and a few others, but definitely this album comes out as the band Mile!

‘The World In Focus’ has 10 killer tracks.  Some completely in your face heavy rocking tracks, a few with a slower tempo that are a little more melodic yet still heavy at the same time and one track that’s more of a ballad, but an intense, angry ballad. The resonating sound throughout… that Mile knows what they are doing, that they have found their sound and they came prepared to deliver one hell of a new album!

The album kicks off with their recently released video track “Crying In Your Sleep” that’s heavy and manic!  It has this cool fade in as the volume rises up and manic blast beats kick in on the drums as the song rips wide open with killer guitar riffs and raw, gritty vocals that could easily represent to the listener that the band is making a massive statement like, WAKE THE F**K UP, WE ARE  MILE! This song was the perfect opener to ‘The World In Focus’.  It sets the expected tempo for the album off with a strong presence that’s there immediately for the listener to get sucked into straight away.

The second track does not relent either. It rips open with a killer riff and the lyrics “Why don’t you die motherf’***er”. It’s manic, raw and Maksen’s vocals even channel some Myles Kennedy tone throughout. The title “Why Won’t You (Die Motherf***er)” immediately caught my attention and I said to myself that this is clearly going to be the theme song for many listeners! The musical part of this track is so complex yet simplistic at the same time.  Listeners are going to truly enjoy the mix of guitars in this one, plenty of great riffs, nice complimenting rhythms and contrasting twin dueling guitars as well.  The bass is heavy, meaty and intentional and the drums…. if you are a fan of a mix of drumming styles or just a huge fan of drums, this track, this album has tons of great drumming to enjoy.

“Sky Is Red” starts out with this almost A7X feeling guitar track that holds an ominous feel through the entire song.  It changes up Mile’s sound from the first two intense tracks to show the listener the flexibility in their sound.

“Can You Feel The Night” kicks the album right back up to that tasty intensity that was felt in the opening tracks, but on this track the vocals are more melodic and harmonizing.  Another track of fun upbeat tempos and manic drumming.

“Burning” starts out with this atmospheric, outer-space like riff that rips open with bass into what I most notably thought to be reminiscent of old school Korn then mixes flavors of Audioslave, Alterbridge and A7X that works insanely well.  This track goes in many directions. Great music and killer vocals set with a steady tempo that slows down and then explodes open. You will want to be up on your feet moving to this one!

“Fade Away” is the one song on the album that doesn’t fall in line with the rest.  It’s slow, it’s raw and still intense, but in a dark and angry type of intense. You can feel the pain in this song. The music is angry, intentional and makes you feel the context of the lyrics.

“Sacrifice” brings ‘The World In Focus’ back to the high intensity, kickass feel of the album.  Vocals stay in a melodic tone through this track, but holy crap half way through the track the guitars sound almost as if they are being scratched on a DJ table because that have that “wicky, wicky, wicky” scratch style tempo to them, but not in any sense of DJ scratching in the traditional sense.  When you get to them, you will immediately recognize what I am talking about. It’s in about the same place the drums have a massive kicker trigger in them.  Killer track!

The intensity grows even more as “Dressed In Black” kicks off with a simple guitar riff laced with manic drums that instantly says to the listener, “we are going to rip through you a little more be it is over”. Mid-stream on this track breaks open with some cool twin guitars then there is a break out solo that ends with a drop in tempo that slows down the vocals for a moment and then they come right back into ripping your ears wide open. I am seriously wondering where they came up with so many great tracks for one album!  To be down to track 8 of the 10 and still be this completely immersed in this album speaks volumes to me about this bands writing style.

“When Time Goes By” starts out with a symphonic intro that goes this softer tempo that makes the listener wonder what direction the band is taking this track to.  I would say on this track it’s a more modern rock sound that explodes in heavier intensity at the chorus but drops back into a modern rock feel during the rest of the track. I think this would be a song you’d expect to see on most commercialized rock radio stations throughout North America. It’s got that feel to it that’s deemed acceptable to traditional rock music markets.

Now for the last track, “We Stand Tall”. I would say this last track also has the same feel as the previous track, but with a bit faster tempo.  I would also expect to see this track on the radio too.  It’s a solid last track to their album. It’s big, intense and something listeners will want to crank up and sing along to.  Completely solid finish to ‘The World In Focus’.

To me Mile is a band I need to see live soon! I want to see how they keep this intensity through their entire live set, because they’d clearly have to leave every ounce of energy on the stage by the time they are done. But for now I will happily settle for listening to‘The World In Focus’ everyday!  I am truly hoping to see these guys land an international tour that brings them to North America so you can all see them live too, but until then maybe we will get lucky and see them added on Sweden Rocks lineup for 2018 so we can bring you live coverage of Mile.

My final thoughts on ‘The World In Focus’, throughout this album you will find yourself headbanging, air guitaring, air drumming and just losing yourself in the music.  This album inspires music lovers to just let loose and lose their minds! I absolutely loved this album and I think it will be one of the best albums of 2018! I highly encourage all of you to grab a copy of ‘The World In Focus’.

Tracklisting:
Crying In Your Sleep
Why Won’t You (Die Motherf***er)
Sky Is Red
Can You Feel The Night
Burning
Fade Away
Sacrifice
Dressed In Black
When Time Goes By
We Stand Tall

The album is out now!  We’ve linked it below.

So tell us what you think about this new track?  Head over to our Facebook page and join in on the conversation!

Check out the interview with Mile here.

12 New Songs to Break the Back to Work Blues!

January 6, 2018 Diane Webb
Help Get The Word Out By Sharing This With Your Friends

July 25, 2019 GMM
Help Get The Word Out By Sharing This With Your Friends

Help Get The Word Out By Sharing This With Your FriendsDaze of Summer Band #55: […]

Interview With the Band Mile

January 17, 2018 Diane Webb
Help Get The Word Out By Sharing This With Your Friends