Help Get The Word Out By Sharing This With Your Friends
Scottish Rockers, THE AMORETTES, today announce that they have signed a worldwide record deal with German label, SPV/Steamhammer, and will release their new album early in 2018.
“This is great news for THE AMORETTES,” says guitarist/vocalist, Gill Montgomery. “SPV have a tremendous reputation for supporting their artists, so this move makes so much sense.”
“This is the next big step for the band, and we can’t wait to see what the future holds with SPV,” says Bass player, Heather McKay.  “To be on the same label as an icon like Lita Ford, and so many other fantastic bands is unreal.”continues Drummer, Hannah McKay. “We are really looking forward to working together with SPV to take our music further afield.”
Over the last couple of years, a heavy touring schedule with the likes ofThunder, Black Star Riders, Europe, Danko Jones, Ash, Airbourne, The Dead Daisies, Black Stone Cherry and festival appearances includingDownload, T-In The Park, Rock And Blues, Steelhouse, Bloodstock, Planet Rockstock, Hard Rock Hell, Wildfest, Nordic Noise and more, has enabled THE AMORETTES to build a strong and loyal fan base across the UK, Europe, and further afield.
This work ethic of “One gig at a time”, and “take it to the people” broughtTHE AMORETTES to the attention of SPV/Steamhammer Records.
“I always have an affinity for girl bands like Rock Goddess and Girlschool from the UK, or Vixen and Phantom Blue from the USA.”, says Olly Hahn, head of SPV/Steamhammer, “And that’s why I’m really happy that THE AMORETTES are now part of the Steamhammer family. The band worked hard the last years and I’m sure that with the new album, and the team behind the band, everything will pay off!”
“We can’t thank Olly and his team enough for the belief they have in the band,” continues Montgomery, “and we look forward to a long and rewarding relationship together. We’re really excited by our new album, and can’t wait for everyone to hear it.”
THE AMORETTES first exploded on to the International rock scene in early 2015 with the release of their, Chris Tsangarides produced, album, Game On, and an exhaustive touring schedule that took this high-octane Power Trio all across the UK and Europe.  The acclaimed follow-up, White Hot Heat, was produced by Luke Morley of UK Arena Rock act, Thunder, engineered byNick Brine (Coldplay, Ash, Snow Patrol, Bruce Springsteen, The Darkness, and more), and mastered by Pete Maher (U2, The Rolling Stones). 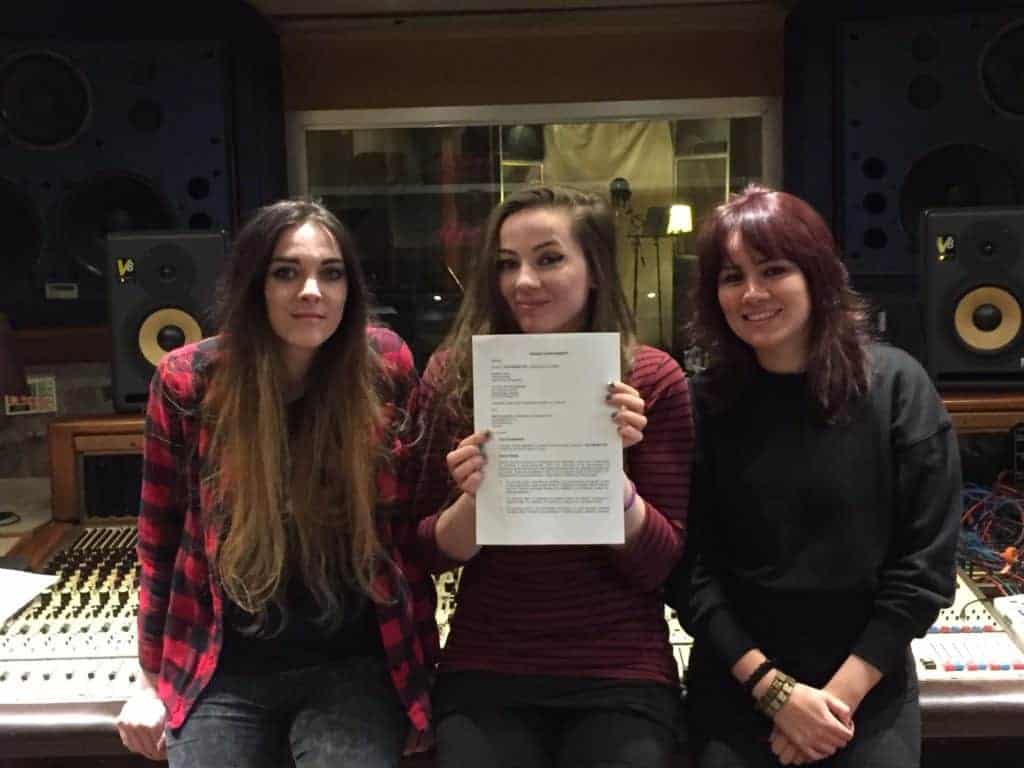 For More Info Visit:
https://www.theamorettes.com
https://de-de.facebook.com/theamorettes
www.spv.de
https://www.facebook.com/steamhammerofficial/
About Diane Webb 1333 Articles
I am music fanatic, writer, photographer and aspiring to play guitar/bass so I can write the music I hear in my head, plus play some of the sick riffs I hear on albums I listen to. I love travelling to see new places, meet new people, learn about local cultures and live with chronic wanderlust. Music, travel, good friends/family and enjoying life is key! I write for Global Music Mayhem, Rocknytt.net (Sweden) and HRH Magazine (UK). You can follow my photography on Instagram: @yesterdazenews Facebook: @DianeWebbPhotography.

March 13, 2018 Diane Webb
Help Get The Word Out By Sharing This With Your Friends

March 23, 2018 Diane Webb
Help Get The Word Out By Sharing This With Your Friends