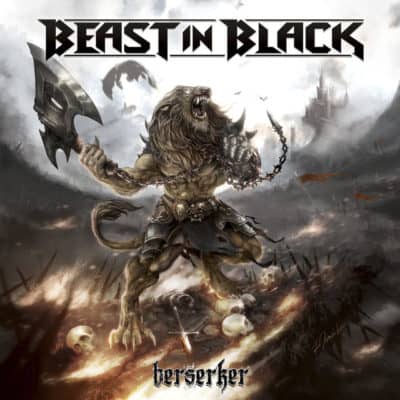 If you’ve been waiting for a raw and genuine power metal album that lingers on the edge of the classic 80’s over the top and almost cheesy style of metal, your wait is over! From the very beginning of this album at opening of the vocals in the ‘Berserker’, this is one hell of a great power metal album. This is a band I want, wait not want, but MUST see live!  If their live show is half as good as their album, fans are going to be blown away!

Vocal stylings on this album go from high-pitched to growling to gritty and raw. You may be thrown off when you get to the song “Blind and Frozen” at the opening vocals as it sounds like there’s a female singing the song but it’s actually a higher octave from vocalist Yannis Papadopoulos that you don’t catch a lot of guys doing. He has a really good control of his vocals that allow him to reach the octave that you just don’t hear a lot of on today’s male fronted metal albums.  Mix the vocals with the really cool music that includes in a manic drums, insane synthesizers, meaty bass, met with old school wailing guitar solos, it’s a really cool song.  These are the kinds of songs that got me into metal and I am thrilled to see Beast In Black has been able to capture this sound in their music.

During the “Zodd the Immortal” you’re going to get slapped around when the guitar solo starts. It’s one of the best on the album! It’s really manic with dueling guitars that wail and screech, it’s just frantic. This song is simply great metal and I think that when I am talking about this band, that’s what people are going to hear me say a lot!  That this band is simply, great power metal! They are going to inspire music fans to let loose and have a great time listening to their music. No over thinking, no over analyzing, just pure enjoyment.

One thing that resonates throughout this entire album is the amazing skill of the musicians in the band. Such amazing skilled performance shines through in each song and you get a full taste of what these guys can do.  Precision guitar riffs that go over the edge taking the listener with them that are often in twin harmonizing style or completely dueling, killer timed percussion through the manic drum tracks, strong bass beats that you can feel, wild synth’s and just insane vocals that leap octaves effortlessly, or at least it just appears that way to the listener!!

“Crazy, Mad, Insane” starts out with a demonic laugh that has the Vincent Price “Thriller” style to it, then flows into this synthesizer filled intro that carries through the track mashed in with uptempo percussion and vocals that go all over the place, but man I tell you, the synthesizer really shines on this track and is harmonized with killer guitar riffs.  It’s such an unexpected pairing but works great.  I have to say this may just be one of my favorite tracks on the album.

The album wraps up with “Ghost In The Rain” that starts out with airy and breathless vocals that leads into a dreamy power ballad that just sucks the listener in as it builds up to a demanding and epic ballad explosion.  What a great way to wrap up this album and leave fans wanting more music!

I loved this album and it will be in my playlist rotation for a long time!  What a solid power metal album ‘Berserker’ is and for a debut album too, I am just in awe at what Beast In Black managed to bring together.  Do yourself a favor and pick this album up today!  My only hope now is that Beast In Black will do a North American tour!

January 18, 2019 Diane Webb
Help Get The Word Out By Sharing This With Your Friends

Help Get The Word Out By Sharing This With Your FriendsBeast In Black Album: From […]

October 25, 2019 GMM
Help Get The Word Out By Sharing This With Your Friends

K.K. Downing Explains The Message in Sermons of the Sinner

A Scar For The Wicked – The Unholy | Album Review

Catching Up With Cyhra at Sweden Rock Festival; Interview with Jake E