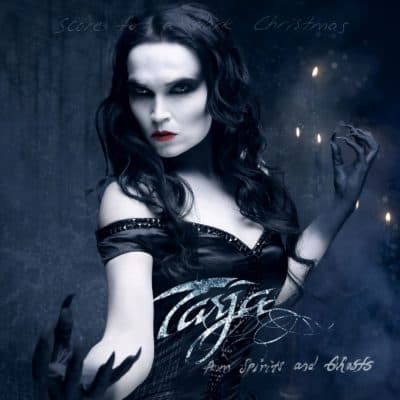 We all know Tarja does some fantastic symphonic metal with a lot of classical overtones.  I have to tell you, there is no metal to be found on this Christmas album. What we do have is some dark, atmospheric, classical music that sometimes boarders on creepy. The funny thing is, I mean creepy in a good way if that is even possible. If Tim Burton did a dark Christmas movie, this would definitely be the soundtrack for it.

Tarja’s take on this release is, “On this album, I explored the other side of Christmas — the Christmas of the lonely people and the missing ones, the Christmas for those that do not find joy in the blinking lights and the jingle bells.”

The first song on the album is also the first single, “O Come, O Come, Emmanuel“. This is a Christian hymn that was translated from Latin. Right away you know this is not going to be a cookie cutter Christmas album. This song is dark, atmospheric and even haunting and remember, this is a Christmas album. The song picks up pace as it goes and it leaves you with a good impression of what this album is going to be like. As always, Tarja’s voice is impeccable.

Next we have the only original track on the album which is “Together“. This starts off with the feel of a traditional Tarja ballad off any of her solo albums. Her vocals really shine on this song and the addition of a children’s choir really adds to the atmosphere. This is one of my favorite songs on the album. This song also picks up pace as it moves along towards what is a bit of a haunting ending.

The third song which is one of my personal favorite Christmas songs is “We Three Kings“. This one is done closer to traditional Christmas music, but keeps a hold of the dark atmosphere that is found throughout the whole album. After that we have another very traditional song in “Deck The Halls“. Once again we have the children’s choir along with Tarja and this song is downright scary in parts. It is hard to believe this is the song we have all heard for years. It is also a major highlight on the album.

In “Amazing Grace” and “O Tannenbaum” the orchestra is really well highlighted. Both songs are vocally stunning and particularly in “O Tannenbaum” it feels like the song was written for Tarja. It is another favorite track of mine. The album continues to hold true to its dark atmosphere, incredible music and stunning vocals. I am not sure if I should be listening to this for Halloween or Christmas. It truly is a very unique album, the likes I have never heard.

One last song I want to highlight is “God Rest Ye“. This is the best track on the album. This one also has a more traditional feel to it, but it is still a long way from the original. As the song moves along, it speeds up until the end of the song. This is another song that just feels like it was written for Tarja herself. You can really feel Tarja’s passion for this album and these songs. For someone to put this much effort into a Christmas album shows how much she must have believed in this project.

I must admit I am a fan or Tarja which makes this hard for me to review. It is not a metal album in any way, but if you just listen to it based on music and vocals it is absolutely stunning. I almost wish it was not a Christmas album so it would be something I would listen to year round. For some of us, we might any way. If you must have metal music on an album this is not for you. If you can appreciate great classical music, done in a dark atmospheric way with some of the best vocals you will hear this album is a must have. It is very rare you come across a release that is truly unique like this one. I know I would rather listen to Christmas music done this way, than the traditional way.

TRACKLIST:
O Come, O Come, Emmanuel
Together
We Three Kings
Deck The Halls
Pie Jesu
Amazing Grace
O Tannenbaum
Have Yourself a Merry Little Christmas
God Rest Ye
Feliz Navidad
What Child Is This
We Wish You a Merry Christmas

About Contributor 56 Articles
This post was by a Contributor - Please see article for name credit.

Epica and Lacuna Coil Peform Epic Show at the Showbox

September 17, 2017 Contributor
Help Get The Word Out By Sharing This With Your Friends

August 18, 2017 Contributor
Help Get The Word Out By Sharing This With Your Friends