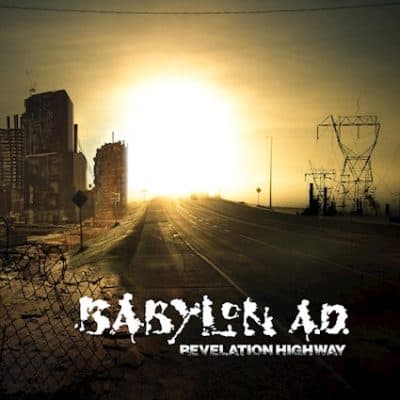 Babylon A.D. is one of the few metal bands from the late 80’s to be operating with all its original members. They are celebrating their 30th anniversary with the release of their new album Revelation Highway. Their self-titled debut album released in 1989 spawned three #1 classic songs on metal radio “Bang Go The Bells“, “Hammer Swings Down” and “The Kid Goes Wild“. They also had several MTV videos and with the bands constant touring they were a favorite among metal fans.

Revelation Highway opens with “Crash and Burn” which has a very classic 80’s metal sound to it. In fact this album could have been released in the late 80’s and would have fit right in with the top bands of the day. Derek Davis with his power vocals and a whole lot of guitar riffs and solos provided by Ron Freschi and John Mathews.

The second song also grabbed me, “Fool On Fire” which has a great chorus and Davis’ voice is really in great form. You hear a little raspy blues quality in his vocals if you listen closely. Once again we are treated to some great guitar work throughout the whole song.

The first single off the new album is “Rags to Riches” which starts out with a lot of great guitar riffs. Once the vocals kick in we definitely have a song that would have been all over metal radio and MTV. It is a perfect song for a video. The link below is just the official audio single, but it definitely gives you a good feel for what the album is going to give you.

Another song that stands out is the ballad “One Million Miles“. Being a metal band from this era you’ve got to have the ballad! This one is a good one and has a real nice flow to it. It has a nice sing along quality to it.

Two of my favorite songs on the album are “Last Time For Love” and “Saturday Night“. These are classic metal anthems that rock you to the core. It is songs like this that give me hope that one day the metal scene will once again tear across America leaving no prisoners in it’s path. Sure, a few of the huge acts of the 80’s have kept going, but there is a lot of great music out there that American radio needs to be playing and this album is one of them. I remember Babylon A.D. mainly from their MTV videos, but this album has left a lasting impression on their music. This is one of my favorite albums of the year in this style of metal.

TRACKLISTING:
Crash And Burn
Fool On Fire
One Million Miles
Tears
She Likes To Give It
Rags To Riches
Last Time For Love
I’m No Good For You
Saturday Night
Don’t Tell Me Tonight

August 18, 2017 Contributor
Help Get The Word Out By Sharing This With Your Friends

Help Get The Word Out By Sharing This With Your FriendsOn September 9th, 2017, the […]