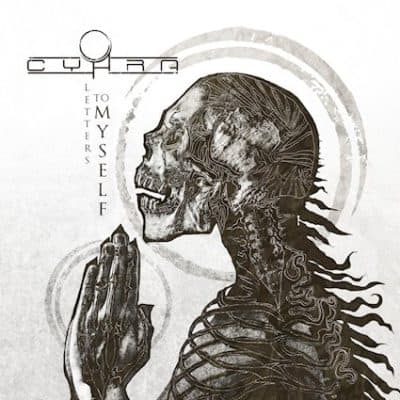 Album Review: CyHra Letters To Myself

For those of you not already familiar with who this new band CyHra is or made up of, let me fill you in.  CyHra is made up of former members of the bands In Flames and Amaranthe and a current member of Luca Turilli’s Rhapsody.  Jake E (former vocalist, Amaranthe), Jesper Strömblad (former guitarist, In Flames), Peter Iwers (former bassist, In Flames) and Alex Landenburg (current drummer, Luca Turilli’s Rhapsody).  For anyone who’s followed these musicians, you know what kind of musical talent and technical abilities they each have.  So to have them all in the same band, one can only expect something totally insane and thrilling to please your musical senses.  Well I have to tell you, it’s so much more than you could even imagine it to be.

Back on September 8th, CyHra released the video for their first single off the upcoming album Letters to Myself, “Karma” and music fans all over the globe started chattering online about the new music and what they’ve been speculating the rest of the album will sound like.  I thought I had a pretty good idea too, until today when I had a full listen to Letters to Myself.

The Meat and Bones of What Makes it Great!

This album goes in many different directions musically and when all the tracks come together they fit like the perfect pieces of one complete puzzle.  Underneath many of the songs are similarities of musical styles as heard with In Flames, but how could you not expect hear some similarities with two iconic former members of In Flames being part of this project.  But it is important to point out,  this is not an In Flames album, the similarities only go so far and their sound morphs into something very complex and deep with the addition of Jake E‘s vocals and writing style added into each track.

Where Jake E did more screaming vocals with Amaranthe, he’s got these beautiful clean vocals with CyHra that stretch into higher octaves I never would have expected to hear from him. Add in the lyrics which are deep, touch the dark places we all go to or have been at some point in our lives then mix them with the intensity in Jake E‘s vocals and the songs deliver such an emotional experience.

When you get to the technical side of the album, it’s so well done.  Everything is perfectly in place.  The post production is a masterful mix and all the little pieces that make up this album flow so cohesively you’d think CyHra had been together for many years. CyHra clearly has the same vision for this project to have delivered something so well written, emotional and technically balanced. Having listened to this album numerous times now, I have to say that through every new listen, I discover something new I didn’t hear the previous time and feel more appreciation each time I reach the last track.

I haven’t been this emotionally connected to an album in a really long time.  Growing up, music was my savior and my escape from life’s ups and downs.  I would have loved to have this album when I was younger to escape in to. It touched my soul in such a deep and unique way that by the last track “Dead To Me” I actually had to fight back the tears that were forming from having experienced such a complex and well done album. There are only a few times in my life I’ve ever felt such a strong connection to an album and this one truly took me by surprise.  I never expected to have this kind of reaction when I turned it on, but am so thrilled that CyHra was able to give me this rare experience. I can only hope that you also have this same connection.

If there is one new metal album to add to your collection before the end of 2017, it is Letters to Myself. I expect to see this album getting nods for one of the best metal albums of the year.  It’s a rare find and a true musical journey.

February 9, 2018 Diane Webb
Help Get The Word Out By Sharing This With Your Friends

Help Get The Word Out By Sharing This With Your FriendsCYHRA Heartrage Video Release – Swedish metallers, […]

August 27, 2019 GMM
Help Get The Word Out By Sharing This With Your Friends

June 17, 2018 Diane Webb
Help Get The Word Out By Sharing This With Your Friends