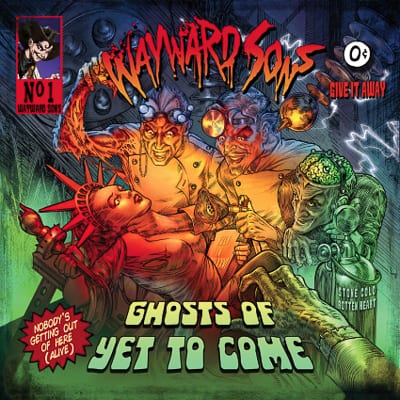 The Wayward Sons album Ghosts of Yet to Come has been spinning around in my review playlist for the last couple of weeks. I am completely a fan of this new album.

This new album has all the components that rock fans will enjoy. It has everything from really killer vocals that have a fun, gritty, raunchy and at times a soulful bluesy undertone sound in them that is highlighted with high-pitched screams throughout the album. Every song has killer drum tracks that just pound away and easily control the tone of the album. Tons of upbeat tempo. Killer guitar riffs that highlight what good classic rock ‘n’ roll is all about. The most unexpected part about the music for me was the endless demanding bass that is present from the beginning to the end of this album. Not the typical bass you hear in most albums today, very deep with a little slapping going on and just downright sexy bass beats. If that’s not enough to entice you to check out this new album, it gets better.

The songs on this album are well written, they are performed masterfully and the mixing and mastering delivers a polished album. There’s something really special in this album. Songs like “I Don’t Want to Go” and “Killing Time” just grabbed my inner rocker by the soul. For those of you who love really strong and forceful bass in a song, “Don’t Wanna Go” is the track for you. It starts out with this really heavy bass chord that makes you pay attention. It’s then paired with ripping guitar riffs that are so pleasing it may force a tear or two. Then you get to the song “Crush” and you’re gonna hear undertones of Thin Lizzy in it and rockers who grew up with that influential music are going to connect in a very unique way to Wayward Sons at this point.

It’s been a while since I’ve come across a real and genuine rock ‘n’ roll album that has affected me in the way that this album has done. It’s taken me back to the glory days of rock ‘n’ roll when vinyls were the preferred choice and people really sat back to take in a new album fully. I really enjoyed having that feeling thrust upon me. That love of the music, is exactly what I have found in this album and I just want to grab a hold and not let go.

Needless to say if you can’t tell already, I really like this album and I think you need to check it out. If you’re a fan of simplistic yet good rock ‘n’ roll music that will take you back to the basics and heart of rock ‘n’ roll, this is the album for you.

TRACKLISTING:
Alive
Until The End
Ghost
Don’t Wanna Go
Give It Away
Killing Time
Crush
Be Still
Small Talk
Something Wrong
Get Loose

Wayward Sons – The Truth Ain’t What It Used To Be

September 21, 2019 Diane Webb
Help Get The Word Out By Sharing This With Your Friends

Help Get The Word Out By Sharing This With Your FriendsWAYWARD SONS Album: The Truth […]

March 22, 2019 Diane Webb
Help Get The Word Out By Sharing This With Your Friends