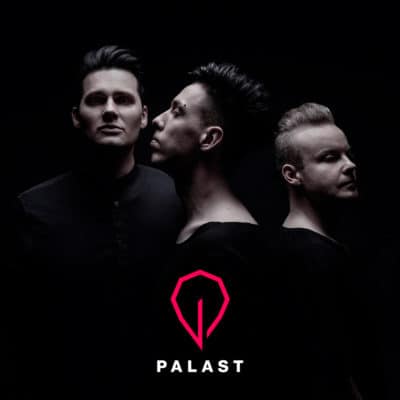 A few weeks ago famed metal guitarist Sascha Gerstner (or as he is called in Palast, Sascha Pace) of the German metal band Helloween made a post to his Instagram account about a project he’s been working on called Palast. So being that I have followed his work for sometime I had to check it out.  I have to tell you, I was completely blown away with this new project for a few reasons, first being that it was not metal. Instead this new project is an industrial techno project heavy on 80’s reminiscent synthesizers.  Second, how news of this new project has not reached the fans in the USA yet since they’ve been together for a few years already?  Well part of that can easily be answered by the fact that Sascha has not had much of an online presence but decided to finally add an official Facebook page and Instagram account.  So now fans can see what all he’s working on outside of Helloween.

For fans of Helloween, you can relax, he’s not left the band but just doing additional projects. Expand your musical horizons and follow him on this amazing journey! The group is really good and the music is something totally different from what he’s been so widely known for.  I didn’t think I could admire his work anymore than what I have been seeing for years already, but most definitely I do.

Let’s talk about Palast!  I got my hands on the self titled release Palast and took it for a full spin last night.  From the first note this album had my full attention.  I immediately was thrust back into to the 80’s style synth-pop New Wave music styles of Depeche Mode, Yaz, OMD and the likes but with an updated and modern sound in the mix.

The song lyrics have depth and meaning to them. They touch into deep subjects about how we as humans are destroying everything in the world, self-confidence, fitting in, love, being lost in life and self discovery. If you’re looking just to enjoy the album you can definitely get lost in the music. The album is packed full of danceable songs that you would expect to find in your favorite offbeat nightclub.

The music itself is packed full of electronic beats, synthesizers and raw vocals. There’s a dark yet experimental feel to this album that most listeners will pick up on. At the same time you may find yourself longing for the old, dark and gloomy goth style nightclubs where you can just go and dance the night away without any of today’s pretentiousness. Where fashion dictates your clothing must be an all black ensemble and that you aren’t required to be on any elite list to gain entry.

I really enjoyed this album and I am glad to see this side of Sascha‘s musical prowess. I think it’s clear that working with Tommy Apus and Marc Engel has helped to stretch the creative process through this project. Although this album is very retrospective, leaning way back into 80’s influences, Palast is a group that is willing to move in the direction that the music takes them in. I wouldn’t be surprised to see the next release take a completely different musical direction. I’d actually welcome that kind of bold experience from this group.

I think this album is definitely worth picking up and checking out. You can find Palast on Facebook here.

About Palast: (From Their Label)
What a majestic sound! A band name on which alone one could ponder for ages. However, the three Berliners have not chosen this name to be an allusion to of their music. They recorded their first songs at renowned Funkhaus Berlin, dominated by palatial features, hence the name.

The awe-inspiring architecture of said facility, counting A-ha and Sting among its illustrious clientele, had significant impact on the musicians: a sense of sound, space, size, quality, dedication, and the love to experiment.

Musically, one might be inclined to place Palast in the eighties, because they rely solely on genuine vintage synthesizers home of that era. Authentic e-drums, real guitars. Their contemporaries would reach mostly for plug-ins to create these sounds. Not so PALAST, who love and need this artisan way of electronic music production. The handling of this aging equipment constantly provokes new ideas,” Sascha Pace, singer and bandleader comments. Said ideas came pouring out and manifested themselves in a series of catchy songs such as “Shut The Door”, “Tell Me Why” or “Strong”, but above all the first single “Mirror Mirror”, Sascha’s personal tribute to the fashion world.

The EP “Hush” released last fall marked the beginning and after less than 6 months construction time the first PALAST is now completed, in the shape of a small, silver disc and fine vinyl.

October 17, 2017 Diane Webb
Help Get The Word Out By Sharing This With Your Friends

Help Get The Word Out By Sharing This With Your Friends“‘Evil Dead II.’ ‘Dawn of […]

April 9, 2021 Diane Webb
Help Get The Word Out By Sharing This With Your Friends

Help Get The Word Out By Sharing This With Your FriendsMeet Steel Rhino, a new […]

October 24, 2019 Diane Webb
Help Get The Word Out By Sharing This With Your Friends

Help Get The Word Out By Sharing This With Your FriendsSaint Asonia – Flawed Design. […]

TRIBULANCE To Release The Aftermath of Lies May 5th