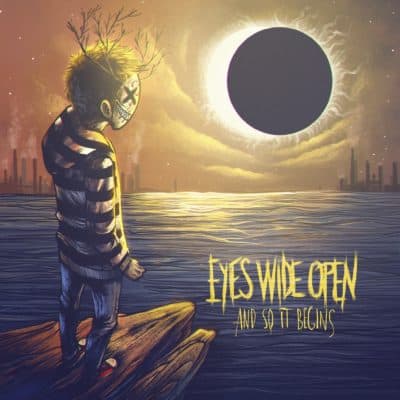 For fans of In Flames, you need to check out Eyes Wide Open!  Another band in a long line of succession in the Swedish Metal music scene, Eyes Wide Open has delivered a killer new album And So It Begins, a follow up to their 2013 release Aftermath. EWO has gone through a vocalist change since the last album and this new album has proven their talent and resiliency by how they’ve moved forward with their music.

EWO‘s And So It Begins is a masterful album!  It’s the perfect blend of metal to clean and screaming vocals.  The songs are well written and as the album progresses you can see how each song fits in the entire album.

The album kicks off with “Death of Technology”. It has this really interesting intro that sounds a bit like radio static over the music. The lead into the vocals starts with screaming vocals and through out the song goes back and forth between clean and screaming vocals. You will definitely relate to the music and recognize In Flames undertones in the music but in EWO‘s on style. As the album progresses into the second track “Defining Me”, it’s another modern metalcore song that’s similar in sound to the first song.

As you get to “Fist Up” the album takes a heavier, more aggressive turn. It’s screaming vocals, heavy riffs through out and fast aggressive temps. It’s going to make up get up and move. I could easily imagine this being the song that makes a live crowd erupt into a pit.

The album slows down on the fourth track “We Reached for the Sky” then into “Scream”. The tempo’s were much slower, the music dropped down in tone and went into a bit of a darker metalcore style but as “Scream” progresses is explodes in tempo and brings the tone of the album back up just before heading into the next track.

One of my favorite tracks on this album, which was really hard to pick out of all these great songs, is “The Last of Us”. The guitars in this song are just nuts with a weird kick off of futuristic riffs, the bass is manic, drums are kicking really hard and the vocals and lyrics are angry. And for you bass fanatics, “Never Meant to Be Heaven” is a song for you. The bass is so dark and fast in this track. It’s smooth and sturdy at the same time, you can’t miss the bass in this song.

This back and forth of tone and aggression permeates throughout the entire album. It’s such a well written album and it showcases the skill and craft that Eyes Wide Open hold in writing and performing. Top that off with deep lyrics in many of the tracks, this is one hell of an album. It will reach many of those little spaces that the music lover is looking for that many albums fail to connect with.

This album is out now!  Check it out and pick up your own copy!

About EWO:
Formed back in 2011 by guitarists Kristofer Strandberg, Erik Engstrand and bass player Jesper Lindgren in Karlstad, Sweden.

Eyes Wide Open has since carved their way into the halls of Swedish Metal. Pointed out as a Melodic death metal or metalcore band by different genre purist, but Eyes Wide Open’s soul lies within the melody, big choruses and their catchy riffs.

With And So It Begins the Eyes Wide Open trilogy is finally complete. Starting with ”Revelations” to tell us whats about to come if we continue to leech on this planet and ”Aftermath” how we may or may not live through it.

”And so it begins” takes on the perspective of today, where we stand with all of our problems like wars, environmental disasters and our addiction to luxury. Will the revelations come true?

With the sudden departure of vocalist Patrik Fahlin, Eyes Wide Open had to evolve and Erik stepped up as their new vocalist.

Erik says: People probably thought we were done for when Patrik left us, but we pulled through big time. And now I don´t hesitate to say we are better than ever. With And So It Begins we prove ourselves among the top players and now I´m just thrilled to get out there to kick some ass.

February 9, 2017 Diane Webb
Help Get The Word Out By Sharing This With Your Friends

November 20, 2018 Diane Webb
Help Get The Word Out By Sharing This With Your Friends