Review and photos by Bradley Todd.

John Mayer’s latest album and tour are both named The Search for Everything, and the title is fitting as he does seem to be a man in search of everything…musically, at least.

Mayer’s musical tastes are wide ranging, from pop to R&B to folk to rock, and then some. And while the new album mostly leans pop, Mayer has constructed a show format for the tour that allows him to embrace all of his musical interests in one performance. The show is divided into chapters, with each giving a different look, sound and configuration of musicians.

Chapter 1 had Mayer opening the show with his full band, a supporting cast of seven – two additional guitarists, a bass player and drummer, two background singers, and a keyboardist, and consisted of three new songs out of five (see setlist and gallery below). 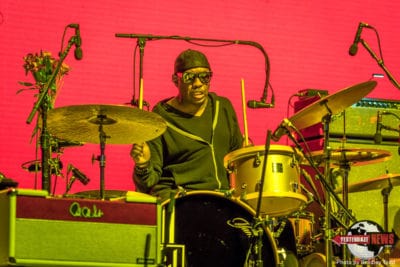 Chapter 2 featured Mayer playing solo acoustic, and addressing the crowd on a number of topics including some self deprecating humor about his pop hit, “Your Body is a Wonderland”, which was performed during this chapter. What this chapter lacked in the musical momentum of Chapter 1, it made up for in endearing charm that certainly appealed to the female fans in attendance.

Chapter 3 turned up the heat on what was an unusually chilly evening for early September, as Mayer was joined again by drummer, Steve Jordan, and bass player, Pino Pallodino, who along with Mayer, comprise the John Mayer Trio – an electric rock and blues vehicle the musicians have played in together in the past. This chapter saw a good deal of rocking despite only being three songs long, and brought out Mr. Mayer’s rock guitar heroics not normally featured in his pop repertoire. 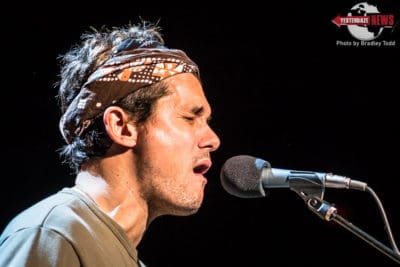 Chapter 4 was a return to the full band and featured some older hits, such as “If I Ever Get Around to Living” and “Slow Dancing in a Burning Room”. The full band really hit its stride during this chapter, which also included more extended guitar jamming certain to please followers of Mayer’s guitar prowess – which also includes a growing legion of Dead & Co. fans that are showing up at Mayer’s solo shows (Dead & Co. is an offshoot of The Grateful Dead that Mayer has been collaborating and touring with since 2015). 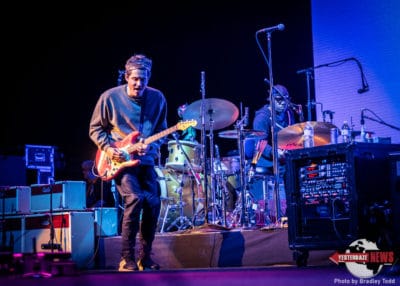 Chapter 5 and Epilogue were the encore of the show and consisted of slow, emotional hits that brought the audience in for a smooth landing of what was approximately a 2:15 flight on the John Mayer Express. If I had one complaint, it would be that only one song from Mayer’s excellent, folksy album, Born & Raised, made it into the evening’s set. But John’s catalog is deep enough now that favorites are certain to be left out on any given night (Full Gallery Under Setlist).

SETLIST:
Chapter 1 – Full band
1 Why Georgia Why/No Such Thing/Why Georgia Why
2 Moving On and Getting Over
3 Helpless
4 Who Says
5 Changing

Epilogue
19 Never On the Day You Leave

March 23, 2018 Contributor
Help Get The Word Out By Sharing This With Your Friends

June 11, 2018 Contributor
Help Get The Word Out By Sharing This With Your Friends

Sons of Apollo Live In Joliet

February 21, 2018 Contributor
Help Get The Word Out By Sharing This With Your Friends