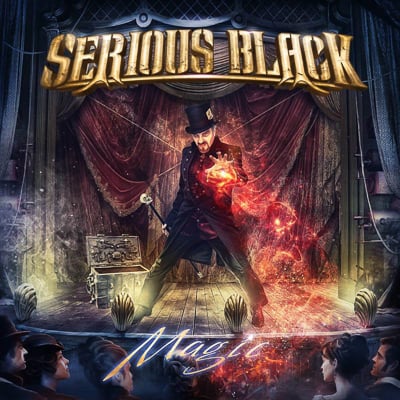 Magic is the third album release from the band Serious Black. It follows the previous releases Mirrorworld (2016) and As Daylight Breaks (2015).

From my first initial glance at the artwork on the cover of Magic, I thought to myself this album was going to be somewhat dramatic. I was correct with my initial thought as this album is a concept album that breaks away from the previous releases. The storyline was created by vocalist Urban Breed. In this album they introduce a mysterious legendary figure called Mr. Nightmist who has passed through multiple generations.  Then they take you into a story line from the beginning to the end.  It is a story of magic, persecution, curses against those who do not understand the mystical forces and the desperation of being free from the persecution to live as who you are.

This fourteen track album takes you through a storyline that starts out with the introduction of this new character Mr. Nightmist. It is a dramatic introduction between the score and narrative that leads straight into the full melodic power metal of “Binary Magic”, the second track of the album.

For me, the vocals were a bit unimpressive at the beginning of“Binary Magic” when compared to the intensity of the music. Luckily, by about a third of the way through the song the vocals picked up to match the music as you would hope for. So if your first impression is to skip to the next track as mine was, wait and you will change your mind.  Being that this is a concept album you need to listen to the album in the exact track order they’ve laid out to follow the story.

“Now You’ll Never Know” to me is the love ballad on the album, very reminiscent of the late 80’s power ballads. This one is catchy with a singable chorus that’s going to get stuck in your head. I think this song will easily be one of the most recognizable songs on the album, simply because of the power ballad feel to it.

“Skeletons On Parade” had an interesting twist starting out with guitars playing in flamenco style then immediately erupting into classic power metal riffs. The vocals had a perfect melancholy feel in them leading into the heart of the song as they transitioned back into a melodic chorus. This was a cool transforming song.

“One Final Song” as you could guess is the last song on the album.  It has an intro of sad violins that transform into an ever-changing score of music as you would expect in the finale of an epic story. Does it truly wrap up the album? What about the story? Does it leave you will a cliffhanger? You will have to listen for yourself to get that answer.

Throughout the album you will enjoy well written music with plenty of melodic rhythmic guitars and bass, great tempos, perfectly placed keyboards, some sampling to introduce sounds mystical and of far off times wrapped in with the complexity of well thought out vocals and lyrics. It will keep you delightfully guessing what direction it will take as it progresses from song to song.

All in all this album was a lot of fun. It was a quite unexpected experience listening to it and full experience where it all comes together like the missing piece to a puzzle.  If you enjoy power melodic metal, this is a record for you.  Magic is out Friday, August 25th.

January 21, 2021 Diane Webb
Help Get The Word Out By Sharing This With Your Friends

December 31, 2016 Diane Webb
Help Get The Word Out By Sharing This With Your Friends

January 19, 2021 Diane Webb
Help Get The Word Out By Sharing This With Your Friends

Help Get The Word Out By Sharing This With Your FriendsHey headbangers! Kickin Valentina has […]