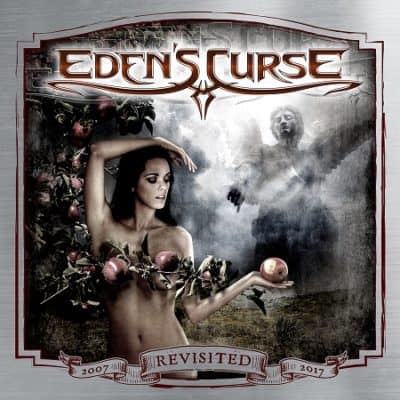 This Eden’s Curse album remake wasn’t meant to detract from what Eden’s Curse have accomplished along their career. This album is meant to be a celebration and a way to include their newest members since the fans were expressing their interest in wanting to hear some of the earlier music rerecorded to include Nikola Mijic on vocals. The bones of the band, being founding member and bassist Paul Logue and longtime guitarist Thorsten Koehne have kept the legacy of Eden’s Curse sound intact and alive. The newer members (Nikola Mijic -Vocals, Chrism -Keyboards, John Clelland – Drums) have added some polish to an already great sounding band.

I listened to the new recording and the old recording at the same time going back and forth between the two to see what, if anything I could find. To be quite honest I didn’t hear anything in the music or vocals that would be shockingly different from the original album which is great. The Revisited album differences are subtle and noticed mostly in the vocal styling of the two different vocalists on each album (former vocalist Micheal Eden compared to current vocalist Nikola Mijic). Each perform within different octave ranges (Eden higher, Niokla lower) and have different subtle tones in their voices that, unless you are listening really closely, you won’t really pick up on.

What is clear is the difference in the mastering and mixing on the new recording. Revisited sounds more polished and the music seems a bit more produced that the original 2007 release. Chalk that up to technology advances over the last 10 years. It’s a great remake of the original album. Fans of either vocalist will be able to enjoy this remake because there are not huge contrasting differences in the vocals which keep the sound somewhat similar.

It was a great idea to remake Eden’s Curse for the 10th anniversary and to incorporate the newer band members into it. To me, it’s a refreshed release that takes advantage of more modern music technology. This is a solid remake for the fans to enjoy and new fans to discover.

*The re-issue includes a bonus DVD

October 24, 2019 Diane Webb
Help Get The Word Out By Sharing This With Your Friends

Help Get The Word Out By Sharing This With Your FriendsJinjer – Macro. Jinjer is […]

Heartbanger – Through the Dark | Album Review

September 19, 2016 Diane Webb
Help Get The Word Out By Sharing This With Your Friends

New Video: The Adicts – And It Was So!

November 18, 2017 Diane Webb
Help Get The Word Out By Sharing This With Your Friends

Help Get The Word Out By Sharing This With Your FriendsToday! The classic kings of […]