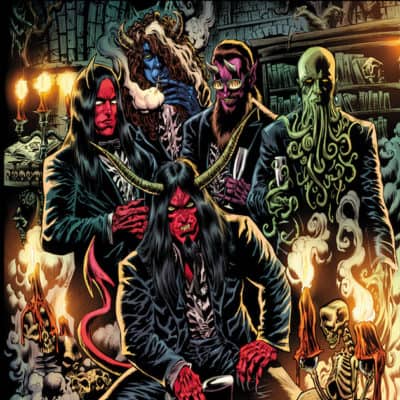 For this review I am just going to start out with what didn’t work and then get into the bones of what really did work. Eloquent Demons starts out with an intro track as the first track “Eloquent Demons (Intro)”, it’s in a monologue speaking style like a rally that I personally did not like. I’m not into listening to people talk in intros on albums. I think the only album I’ve ever truly enjoyed with lots of talking was Queensryche: Operation Mindcrime because of how it blended throughout the entire album and it was more of a theatrical style album. In this instance, the speaking intro just did not work for me. I think an intro or interlude should be a killer instrumental one that sucks you into the album right away. The other thing on this album that did not work for me was the cover of Pink Floyd‘s “Hey You”. I have never been a fan of covers and in this instance I am also not a fan of Pink Floyd, so I really wasn’t feeling this at all. It’s a decent cover and done well by Bobaflex, but I personally won’t listen to it in my rotation.

As the second track “I Am A Nightmare” started, it led off with fantastic instrumental music and I really wish this would have been how the album started. It’s a great song and instantly pulls you into the music.

The third track “Long Time Coming” starts out with this crazy and evil demonic voice which is really cool leading into the song and the music has this waning and dragging style to it that I was really digging.

On the fourth track “Say What You Will” I really enjoyed the harmonizing in the vocals. It just blended really well with the music.  Something that stood out to me that I found really cool was the drumming. I picked up on frequent cymbal strikes that seemed somewhat frantic along with the drumming and it just sounded more intense and interestingly had me listening for each strike. This is a great song and I can’t wait to see this particular one performed live. I’m looking forward to seeing if Tommy Johnson (drummer) will be losing it behind the kit or if he will just appear to be like, ah… no big deal. Another thing about the song is it has a true guitar solo something I think we are missing in a lot of rock music today. It used to be a big part of rock songs in the 80’s and 90’s. Yeah, I know that some of those solos back in the day we’re just way over-the-top, way too long and overly dramatic but, I still like to have some smaller solos here and there throughout a rock album and I thought it was really cool they threw this one in there. It sounded really great and it worked really well so I’m thrilled with that.

The fifth track “Lights Out”  had really cool arrangements throughout, something you don’t traditionally hear in a lot of rock music today.  I really dug it.  It could be deemed as a bit experimental and different sounding but it really works.  I enjoyed that they tried something different on this one and that it made me listen closer to it to see what they were playing next.

If you’re into smart ass, frustrating and satirical views of relationship misery, I am sure many of us have had some of the thoughts in these lyrics, check out track seven “Off With Your Head”. It’s a satirical word play on a bad relationship. I actually laughed a bit throughout this song, because I completely got the frustration of when a relationship has soured, becomes excruciating and how much you can actually grow to hate someone you once loved.  Great tune!

The music on the album is strong with a nice rock sound throughout all the tracks.  They encompass melodic harmonies in the vocals. There were smooth harmonic vocals and then some deep gritty vocals that mixed things up a bit. Another thing about this album that I really enjoyed is that the vocals are understandable so that you can actually sing along once you learn the lyrics to the songs.  I love rock and metal music but so many bands today put out songs that with lyrics that cannot be understood, they are either growling or mumbling so you can’t make out the lyrics, so I really enjoyed being able to hear the vocals and understand them.  Put that with the melodic and harmonizing music and you’re able to sing along with the band and enjoy being able to do so.

I have to give this album a 4 out of 5 simply because I really did not like the intro or the cover song. I get that musicians like to stretch their artistic creativity, it just didn’t work for me. When you get to the fundamental bones of the album, it is absolutely great and it’s definitely worth picking up a copy of Eloquent Demons. I think Bobaflex did great job with this new album and I am looking forward to catching them out on tour.

August 17, 2017 Diane Webb
Help Get The Word Out By Sharing This With Your Friends

WIG WAM Makes Their Return With A Livestream Release Show