How many times have we heard across social media in the past about musicians suffering damages and loses to their most prized tools for making music?  Remember when John English had his guitar run over by Virgin Airlines crew in 2016?  How about earlier this year when Queensryche‘s Parker Lundgren took to social media about Delta Airlines breaking and soaking not just 1 but 4 of their guitars and 1 bass as well.  To their credit, Delta went out of their way according to Queensryche to make it right. 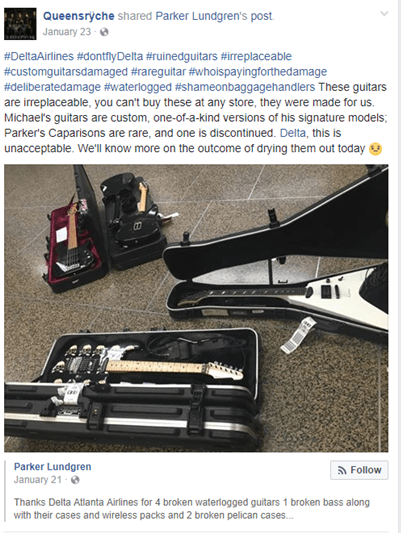 You can take to Google and look up reports of damaged and lost equipment from all around the world, it’s quite disturbing and no wonder many musicians do not want to check their prized gear. How does this continue to happen time and time again?

Well sad to say, it just happened again.  This time to Týr Frontman, Heri Joensen.  Heri took to Facebook to alert friends and fans that his RG30F7TYR 7 string 30 fret Ibanez Guitar went missing on the 29th of July, on their trip from Linate Airport in Italy to Copenhagen’s Kastrup Airport in Denmark with Airberlin.  Not only did his guitar go missing, but 2 additional guitars belonging to Týr guitarist Terji Skibenæs.  How does an airline lose a GIANT guitar case like this one that Heri posted (shared below)?  I can understand misplacing a small bag, but a large specialty gear case that clearly needs one or more people to load it to and from a plane.  Something’s not adding up here!

Guys and gals, keep your eyes out for this missing equipment.  Seriously, our musicians aren’t made of endless budget to simply run out and replace their gear…. Even if they could, gear like this is not simply replaceable.  Oh the horror!! 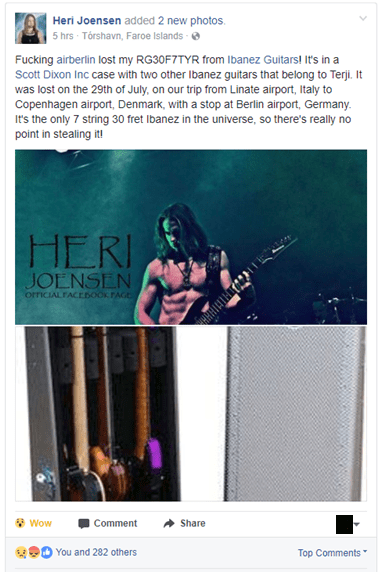 March 26, 2018 Diane Webb
Help Get The Word Out By Sharing This With Your Friends

Help Get The Word Out By Sharing This With Your FriendsIt has finally happened, the Týr […]

TYR To Kick Off North American Headlining Tour This Weekend

May 1, 2018 Diane Webb
Help Get The Word Out By Sharing This With Your Friends

ALL HELL Returns With Prosthetic Records Debut, The Grave Alchemist

CATTLE DECAPITATION To Kick Off Headlining Tour With Revocation, Full Of Hell, And Artificial Brain Next Week!