Help Get The Word Out By Sharing This With Your Friends
On Thursday, July 27th, THE BLACK DAHLIA MURDER will return to the road co-headlining this year’s edition of the Summer Slaughter Tour with Dying Fetus. The US trek – which runs through August 26th with various off dates scattered throughout – will also see THE BLACK DAHLIA MURDER perform Nocturnal in its entirety in honor of the album’s ten-year anniversary! Support on Summer Slaughter will be provided by The Faceless, Oceano, Origin, Slaughter To Prevail, Rings Of Saturn, Betraying The Martyrs, and Lorna Shore. See all confirmed dates below.
In related news, on November 5th, THE BLACK DAHLIA MURDER will appear at Ozzfest Meets Knotfest 2017 at the Glen Helen Amphitheater and Festival Grounds in San Bernardino, California. The band will play alongside the iconic likes of Ozzy Osbourne, Rob Zombie, and Marilyn Manson, among many others. For more information, please visit: ozzfest.com or knotfest.com.

End Tour
** off-date w/ THE BLACK DAHLIA MURDER, Dying Fetus, Oceano, Slaughter To Prevail, Lorna Shore
*^ off-date w/ THE BLACK DAHLIA MURDER, Oceano, Slaughter To Prevail, Lorna Shore
11/07/2017 San Manuel Amphitheater @ Knotfest/Ozzfest – San Bernardino, CA
THE BLACK DAHLIA MURDER will release their as-yet-untitled album this fall via Metal Blade Records. Guitars, bass, and drums were tracked with former THE BLACK DAHLIA MURDERbassist Ryan Williams, while vocals were tracked with Joe Cincotta. Jacob Hansen (Aborted, Volbeat etc.) is currently mixing and mastering the record at Hansen Studios in Demark. The upcoming full-length is the follow-up to 2015’s critically-acclaimed Abysmal, which was named one of the best albums of the year by Metal Sucks, Metal Injection, and Metal Insider, among many others. To preview and purchase Abysmal, visit: metalblade.com/tbdm. 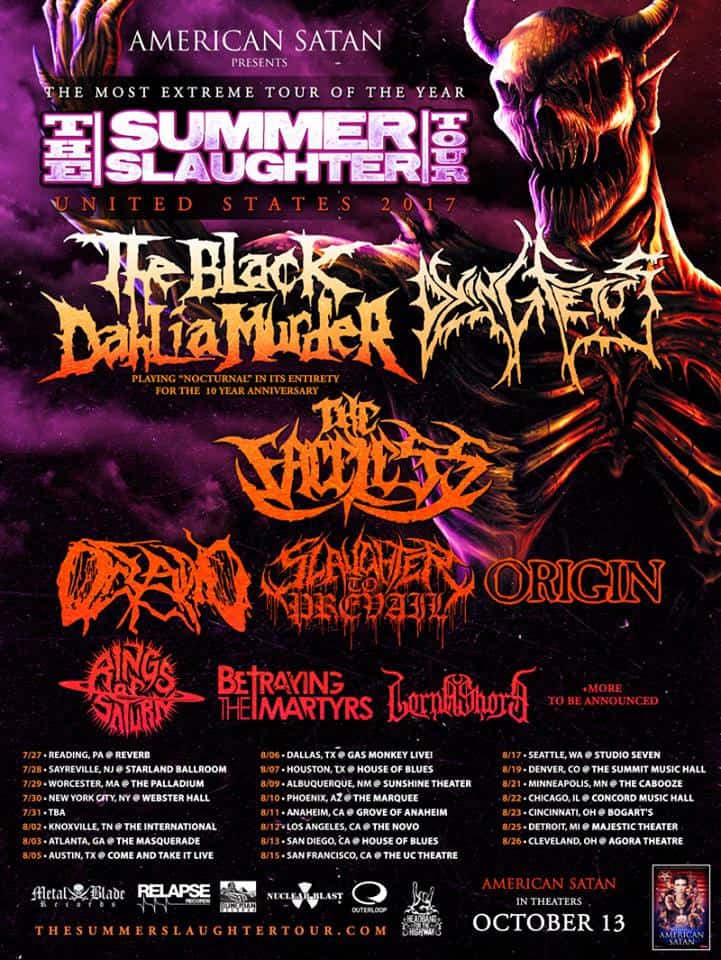 LORNA SHORE TO HEADLINE THE BEG FOR DEATH TOUR

May 6, 2018 Patrick Burt
Help Get The Word Out By Sharing This With Your Friends

April 2, 2017 Patrick Burt
Help Get The Word Out By Sharing This With Your Friends