Seattle has long been known for it’s rock music scene.  With legendary artists such as Jimi Hendrix, Heart, Queensrÿche, Metal Church, Soundgarden, Nirvana, Pearl Jam, Q5, Windowpane and the list could go on for days on end!  We’ve never been too far removed from the worldwide rock scene thanks to the amazing artists who all started out as our local bands.  Today we see a thriving music scene with varied genres of music and fans that are out there supporting live music.  The hard part for many of these bands is getting their names out there to the masses so listeners can find their music.  So we try to highlight our locals when we can to give you a chance to check them out and enjoy their music as much as the Seattle locals do.  Today I’d like to introduce you to a band I personally enjoy called Ten Miles Wide.

These guys have a really great sound and they recently grabbed the opening lineup spot on the main stage for KISW 99.9 FM’s rock music festival known as Pain in the Grass (June 24, 2017 at the White River Amphitheatre in Auburn, WA).  Ten Miles Wide will be opening for some major music artists this year.  Korn, Stone Sour, Babymetal, The Pretty Reckless, Yelawolf, Radkey and Islander will all be performing on the main stage along with Ten Miles Wide this year.  So now is the perfect time to meet Ten Miles Wide through the eyes of Will Andrews (drummer).

Let me start out by sharing one of their music videos with you so you can hear their sound and then check out the interview below to get to know all about the band.

Yesterdazenews: Ten Miles Wide been together officially as Ten Miles Wide since 2015, but from 2011 as the old name The Mother Ship. Were their other projects before that point?

Will Andrews (Ten Miles Wide): Many. I moved across the country when I was 19 from Boston to Seattle to pursue playing music in this city with a band called Omni, which has recently resumed making music and performing. Back in the mid 2000’s, Omni would play shows with John’s old band Future Fossils. Future Fossils played with Vibrant Society, Ryan’s old band. When Omni called it quits for the first time in 2008-2009, I joined Vibrant Society for around a year and played shows with Jake’s old band The Filthy None. A few of us have been in numerous bands prior, during and after The Mothership, some of which are completely different animals stylistically. Drummers like to get around, and I’m no exception. I was up to six bands at one point, which was enough to make me almost lose my mind.

How would describe your music to a new fan, maybe what you hope they hear or what you think they would identify with?

This is sometimes the most difficult question to answer, as it’s hard to draw comparisons to your own music without feeling cheesy, or like you’re boxing yourself in. The rest of the band would probably describe us differently, but I’ll lend my take. I think we’re a mix of familiar Seattle rock sounds with maybe with a modern swagger, and some progressive elements thrown in.

The band released the debut album “The Gross” in Seattle on July 16th, 2016 How long did it take to write the EP?

Some of the songs are very very old, from 10-12 years ago that were tweaked and retooled to fit our current tastes. The Gross, Gotta Go and The Mothership (the song) all would fit into that category. On the flip side, some songs were written either right before or during the recording sessions like A Call to Shiva, and Backburner. It’s a varied mixture of songs from the vault, and brand new ideas. A Pick Me Up was floating around as an idea to be used for the third record from The Mothership, as was Psilocyborg. John sometimes gives me his mp3 vaults on a flash drive and I’ll go through each idea and pick the ones that I like. Dandruff was an old idea that was never performed in any of his old bands, and I loved the vibe of the original demo, so we worked it into our repertoire.

Who did you work with on the album in recording and mixing?

We recorded and mixed Backburner, Dandruff and Psilocyborg with Jack Endino at Soundhouse. All of the other major tracks were mixed and recorded by Derek Moree at Boiler Room in lower Queen Anne. Drums for those tracks were recorded at Ai Seattle.

Have you heard from anyone yet that you have your own distinctive sound?

That’s an interesting question. You know, we’ve been told that we have “our own thing” by numerous people that have seen us live. Once in a while, somebody on the internet will mention something about us being derivative, or that we’re trying to copy this band or that band. Oddly enough, the comparisons they make are usually bands that we never listen to. I think maybe we have a familiar sound that can be interpreted in strange ways by different people. Personally speaking, I can’t play derivative music without feeling completely disgusting inside. It’s something I’m not wired to do, so I’m usually the first person to speak up if a riff sounds like something too stylistic or similar to another band.

Our tour starts on June 10th in Seattle, then we venture down I-5 to play Eugene, San Francisco, Bakersfield, Las Vegas, Los Angeles, then we come back up to play Portland and Auburn WA for Pain in the Grass at White River Amphitheatre.

What got you into music?

I can’t really speak for the other guys, but my parents played a lot of great records when I was super young. I grew up swapping out Police albums on the turntable. When I was 9, I saw Sting live in ’91 and it was all downhill from there. I just loved music, and for some odd reason I was attracted to music that had unique chord progressions and melodies. In my teenage years, music was partially relegated to a coping mechanism, like it is for most kids. It got me through some really tough times growing up and I feel like I owe it to give back where I can. I still to this day love music that is pleasing to listen to while being unique. Musicians must be artful in their approach, as that is where the real substance comes from. It’s a tough balance to find, and it’s something we strive for.

Who are your musical influences?

The Beatles, Soundgarden, Nirvana, Queens Of The Stone Age, Killing Joke, Radiohead, and like a million other bands, genres, movies, TV shows, etc.

We’d love to open for QOTSA (Queens of the Stone Age) or Pearl Jam. I think those fans would be really receptive to what we do.

What is your favorite part about the Seattle music scene?

We’ve all been here for quite some time now. Over the last decade and a half, we’ve come to meet some truly amazing human beings who we’re lucky enough to call friends. There’s a lot of genuine artists here, and being able to go see them on a regular basis provides constant inspiration. We often try to pick our favorite bands in town to play shows with. Fans of the local scene seem to recognize the camaraderie and it makes for an excellent experience for everyone involved.

Any new music in the works?

Lots of new songs in the works. There’s a gigantic vault that hasn’t even been tapped into yet.

Are you signed to a label?

What would you say has been the biggest obstacule for Ten Miles Wide to date?

Touring other parts of the country besides the PNW, though we’re starting to fix that in June.

Talk about Pain In the Grass 2017, how did you guys end up getting on that bill?

It started with getting our music onto their (KISW’s) Loud and Local radio show. They have a sanctioned hour (now two hours) on Sunday evening where they only play Seattle bands. We quickly made friends with Matt Koch who DJ’s at the station has been championing our cause for well over a year. He’s super passionate about local music, and we’re super lucky that he loves what we do. Kevin Diers, thankfully has had us back on the program numerous times for interviews and in-studio performances. We played enough shows to the right people, made some solid friendships and through patience and perseverance we got added this year. I think it took 5 years to make it a reality. It just happened to coincide with the very end of our tour, which was serendipitous, to say the least.

Fans like to find connections with the bands they follow. So what do you want to tell new fans about the members of Ten Miles Wide that may bridge these connection, not about your music but you as people.

We’re pretty down to earth people. We all have our weird quirks, and we definitely don’t think of ourselves as rock stars, which is a really dumb attitude to have. Ryan and Jake are huge Seahawks fans, and John and myself don’t really watch sports. I dunno.. hang out with us sometime! We’re pretty goofy.

Does the band or any of the members stand behind any charitable causes today?

As The Mothership, we played a Layne Staley Memorial benefit show back in 2014. John sings with the regular bands involved with the fund each year. The Mothership did Noise for the Needy in 2012 as well.

Thank you for taking time out to do this interview Will!

Fans, get out there and check out Ten Miles Wide, like Will mentioned, they are heading out on tour in June.  This is a limited West Coast tour.  Check out the dates below and if they are coming to a city near you get out there and support the live music, take in a great show and meet the guys!  Cheers! 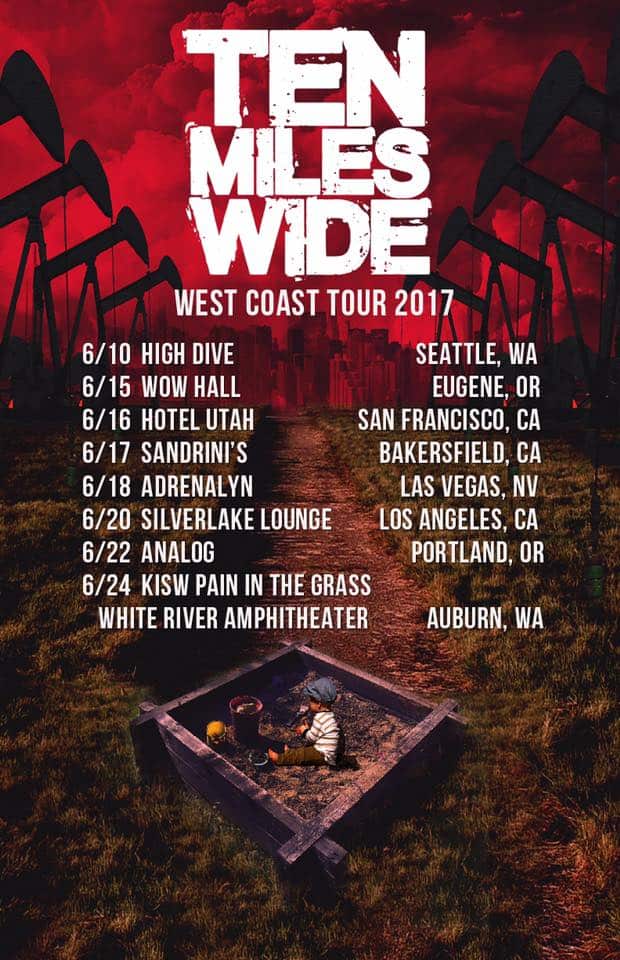 October 17, 2016 Contributor
Help Get The Word Out By Sharing This With Your Friends

Interview with Tony Abreu of Windowpane

June 1, 2017 Contributor
Help Get The Word Out By Sharing This With Your Friends

Help Get The Word Out By Sharing This With Your FriendsSeattle’s very own Windowpane, made […]

July 3, 2017 Diane Webb
Help Get The Word Out By Sharing This With Your Friends

Portland Triple Ticket: In This Moment, Of Mice & Men and Avatar at the Roseland Theater