Help Get The Word Out By Sharing This With Your Friends
Canadian heavy metal/stoner rock faction BLACK WIZARD is currently waging their riff war across the US supporting Brant Bjork and Royal Thunder. The tour, which BLACK WIZARD officially kicked off April 9th in Sacramento, California, will run through May 1st in Los Angeles, California and includes performances with Pentagram. See all confirmed dates below. 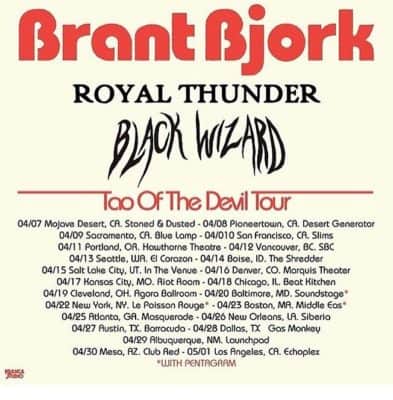 BLACK WIZARD continues to tour in support of their New Waste full-length, released via Listenable Records last year and currently streaming. Boasting nine tracks of red-eyed, road-raging, retro-riff worship, the record continues to earn approval from media outlets globally. Writes Sonic Abuse of the record, “Taking the best bits from thirty years of heavy-ass metal, there are hints of Priest, Maiden, Sabbath, Purple and more, all wrapped up in BLACK WIZARD‘s own, patchouli-scented haze. The prog aspects of the album help to make the sound more unique and interesting and the delivery is spot on – gritty and brutal and yet with a deft touch that keeps things interesting throughout.” In a 4/5 rating, New Noise Magazine concurs, “BLACK WIZARD may be one of the best retro acts going, and the band are certainly more interested in having fun and doing what comes naturally than recycling old riffs. It doesn’t hurt that you don’t have to be stoned to enjoy it, too.” BeatRoute Magazine charmingly champions BLACK WIZARD for being, “the only band in town that will add inches to your dick.” Stereokiller gushes simply, “I hope this band makes albums every year for the next twenty years,” while The Sludgelord hails a, “fine retro record, filled with good riffs and 100% commitment.” Adds Heavy Blog Is Heavy in a 4/5 score, “From the very beginning, New Waste wraps you in a thick blanket of distorted grooviness, galloping bass lines and guitars that seems to switch from shred to riff and back on the drop of hat.”
New Waste is out on Listenable Records. Secure your copy today.
BLACK WIZARD w/ Brant Bjork, Royal Thunder:
4/11/2017 Hawthorne Theatre – Portland, OR
4/12/2017 SBC – Vancouver, BC
4/13/2017 El Corazon – Seattle, WA
4/14/2017 The Shredder – Boise, ID
4/15/2017 In The Venue – Salt Lake City, UT
4/16/2017 Marquis Theatre – Denver, CO
4/17/2017 Riot Room – Kansas City, MO
4/18/2017 Beat Kitchen – Chicago, IL
4/19/2017 Agora Ballroom – Cleveland, OH
4/20/2017 Baltimore Soundstage – Baltimore, MD w/ Pentagram
4/22/2017 Le Poisson Rouge – New York, NY w/ Pentagram
4/23/2017 The Middle East – Boston, MA w/ Pentagram
4/25/2017 Masquerade – Atlanta, GA
4/26/2017 Siberia – New Orleans, LA
4/27/2017 Barracuda – Austin, TX
4/28/2017 Gas Monkey – Dallas, TX
4/29/2017 Launchpad – Albuquerque, NM
4/30/2017 Club Red – Mesa, AZ
5/01/2017 Echoplex – Los Angeles, CA
BLACK WIZARD was forged in 2009 by four high school friends. Founding members Adam Grant and Eugene Parkomenko were both working underwhelming construction jobs at the time, passing the days to the sounds of Thin Lizzy, Deep Purple, Witch, and Electric Wizard. Heavily motivated by the thick, weighty sounds of bands like Bison and 3 Inches Of Blood monopolizing the scene at the time, “The Wiz” was born. Having followed a true DIY aesthetic, the band has released two full length LPs along with a 7″ single independently and sold over five thousand copies worldwide.
About Diane Webb 1321 Articles
I am music fanatic, writer, photographer and aspiring to play guitar/bass so I can write the music I hear in my head, plus play some of the sick riffs I hear on albums I listen to. I love travelling to see new places, meet new people, learn about local cultures and live with chronic wanderlust. Music, travel, good friends/family and enjoying life is key! I write for Global Music Mayhem, Rocknytt.net (Sweden) and HRH Magazine (UK). You can follow my photography on Instagram: @yesterdazenews Facebook: @DianeWebbPhotography.

March 31, 2017 Diane Webb
Help Get The Word Out By Sharing This With Your Friends

October 2, 2016 Patrick Burt
Help Get The Word Out By Sharing This With Your Friends

March 28, 2017 Diane Webb
Help Get The Word Out By Sharing This With Your Friends

It is Possible to Have Travel Planning Block….