Multi-GRAMMY® nominee, newly inducted Grand Ole Opry members and three-time International Bluegrass Music Association Entertainer of the Year winners Dailey & Vincent continue to expand upon their monumental 2017 with the release of their latest album PATRIOTS & POETS. In addition to celebrating 10 years together as a duo, they’re exploring new boundaries while also going back to their bluegrass roots onPATRIOTS & POETS, which features collaborations with Steve Martin, Doyle Lawson, TaRanda Greene, David Rawlings, and Bela Fleck.The multiple IBMA and Dove winners, who Billboard stated “continues to set the standard for which all modern-day Bluegrass artists are measured by,” is releasing PATRIOTS & POETS via Dreamlined Entertainment Group and BFD (distributed via RED), and fans can pick up a copy on iTunes, Amazon and wherever music is sold.

Dailey & Vincent are celebrating the release of the new album by appearing this weekend on SiriusXM’s Bluegrass Junction. They will join IBMA award-winning host Kyle Cantrell for the full morning show, spotlighting tracks from the new album, along with telling stories about what inspired each song from PATRIOTS & POETS, which marks the first project from the dynamic pair with all-new, all-original material. Fans can catch the very special interview airing on SiriusXM’s Bluegrass Junction (channel 62) Saturday, April 1 beginning at 7:00am ET.

To give fans an insight into the making of PATRIOTS & POETS, Dailey & Vincent will appear at the Bluebird Cafe in Nashville on March 31 as part of the 25th Annual Tin Pan South Songwriters Festival Presented by Regions Bank. In celebration of their 10-year anniversary, 50 years of NSAI, 35 years of the Bluebird Cafe, and on the street date of their brand new album, PATRIOTS & POETS, fans and music industry elite can catch the dynamic pair performing brand new songs. The must-see round will also include Brad Crisler, Kevin MaC and Leslie Satcher. The rest of the year includes a jam-packed tour schedule including Dailey & Vincent’s third performance at the historic Carnegie Hall, along with a performance at the iconic Ryman Auditorium. 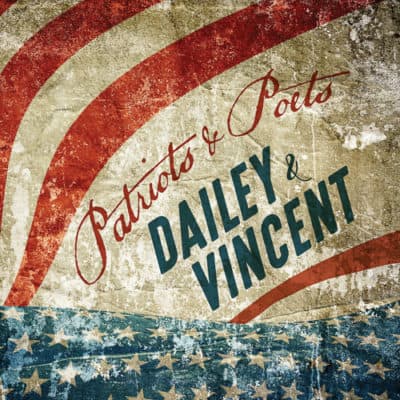 ABOUT DAILEY & VINCENT:
Five-time GRAMMY® award winners individually, three-time GRAMMY® award nominees collectively, four-time DOVE Award winners, and winners of 35 IBMA Awards altogether (including 3-time IBMA Entertainer of the Year Award winners and 3-Time Vocal Group of the Year Award winners), Jamie Dailey and Darrin Vincent, backed by one of the best bands on tour today, are some of the most reputable and elite entertainers in American music; bluegrass, traditional country and gospel music. The concoction of the fantastically instinctive vocal blends of Dailey’s tenor and Vincent’s reedy harmonies has gained them well-deserved praise for their own distinctive style and worldwide recognition as American Music gold. Dailey & Vincent has garnered world-wide attention with their first national, top-rated television series, “The Dailey & Vincent Show,” on RFD TV and over 500 airings of their PBS special “Dailey & Vincent ALIVE – In Concert.” Their most recent CD, Dailey & Vincent ALIVE, debuted at #1 on the Billboard Bluegrass charts and remained at the top position for over 15 weeks. For more information, visitDaileyandVincent.com.

Justin Moore’s “Somebody Else Will” Takes NO. 1 Spot

August 21, 2017 Diane Webb
Help Get The Word Out By Sharing This With Your Friends

August 19, 2019 Diane Webb
Help Get The Word Out By Sharing This With Your Friends

September 27, 2017 Diane Webb
Help Get The Word Out By Sharing This With Your Friends

Interview With: Julien Truchan Of Benighted

New Video: Nergal’s ME AND THAT MAN – Burning Churches