February 2, 2017  Lordi has just arrived in North America to start their North American Monstour Tour.  Their tour kicks off February 2nd in Vancouver, B.C. and runs through March 4th when they wrap up in Dallas, TX.  Get out and see this band on tour!  I caught them while covering Sweden Rock Festival last summer and they put on a great live show!  For those of you not familiar with this band from Finland, check out the information below that will tell you all you need to know, including the tour dates.

The “A side” of the album, Theaterror, is a damn catchy collection of traditional hard rocking Lordi songs. The riffs and obscene words of “Hug you Hard Core” will stick in your mind forever – whether you like it or not. The thematic “B-side”, Demonarchy, tells the story of The Undead Son, The Bloodsucking Count, The She-Wolf and The Witch. Musically Demonarchy represents Lordi more modern than ever. Highly complex song structures and aggressive in-your-face riffing is something we have never heard from these monsters before. The album was recorded and mixed at Sonic Pump Studios in Finland with the producer Nino Laurenne, who was already a familiar guy for the monsters as a producer of the Deadache album 2008.

Lordi was originally formed in 1992, when Mr Lordi started doing demos under this name, but the project was still more or less a one-man-band, with few extra members playing guitar solos and bass here and there. The now infamous monster masks and costumes iced the cake in 1994. In 1997 guitarist Amen joined the band, alongside with keyboardist Enary and G-Stealer on bass. After a full decade of sending demos to record labels, Lordi finally landed on a record deal in 2002 with BMG Finland. G-Stealer was replaced by Magnum on bass, and drummer Kita was the last one to join to complete the 5-member combo.

The release of their first single “Would You Love A Monsterman” and the debut album Get Heavy both saw daylight that year. Before the album release, Magnum was let go and a new bass player Kalma took his place. Lordi´s bold and shameless combination of 1980´s influenced melodic heavy metal with the outrageous horror image immediately caught the attention of the rock media and genre fans around the world. The band´s live shows became known for their horror film-like theatrics and bombastic pyros. The band released their sophomore album The Monsterican Dream in 2004 and continued to tour in Europe, gaining fans and recognition around the world.

In 2006 Lordi went through another major line-up change. The new keyboardist Awa joined the band and Ox became the new bass player. Lordi took part in the Eurovision song contest and won the whole competition as the first and only winner from Finland, with all-time record breaking points at the time in Eurovision history. The third album The Arockalypse was released within the same time frame, with the band´s own idols Udo Dirkschneider (Accept, U.D.O.), Bruce Kulick (ex-KISS), Dee Snider and Jay Jay French (Twisted Sister) appearing as guest stars. The success of the victorious single “Hard Rock Hallelujah” launched Lordi to new heights of media exposure, fan recognition and success, that opened new doors for the band. Mr. Lordi´s hometown Rovaniemi named a market place area in the city center the “Lordi Square”. The Lordi brand was hot in the area of merchandising as well, with items such as Lordi postage stamps, Lordi candies and Lordi Cola coming out in the market.

In 2007 Lordi toured outside Europe for the first time, for example in Japan and in USA, where they played on Ozzfest and toured with Type O Negative. The band also released their own horror film Dark Floors in February 2008.

Late 2008 saw the release of Deadache, the band´s fourth studio album. It was a bit darker and heavier than the previous Lordi material, with the new costumes and parts of the stage show designed and built with a little help from Weta Workshop in New Zealand, award winning cinema special effects house. Lordi´s fifth album Babez For Breakfast was released in 2010. The album was produced by one of the world´s most famous heavy metal producers, Mr. Michael Wagener. Just weeks before the tour, the band´s long time drummer Kita was let go and the new drummer Otus joined in the group.

Year 2012 marked two anniversaries for Lordi, both the 20th year birthday since the bands birth and the 10th anniversary of the release of their debut album Get Heavy. However, all the planned celebration was quickly toned down hard, as the drummer Otus passed away on February 13th. After the time of silence, the band played the confirmed gigs and summer festivals accompanied by a musician mysteriously named as The Drummer. Another line-up change became reality in early August, when the long-time keyboard player Awa played at the anniversary show in Rovaniemi. That was her last gig with Lordi.

When finally the new drummer and the new keyboardist had been found, the band went again to the USA to record their sixth studio album, To Beast Or Not To Beast, under the production of Michael Wagener. The album was musically the most aggressive Lordi album yet, inspired by the technical and brutal way the band’s former drummer Otus played Lordi songs. In December, the keyboardist Hella and the drummer Mana were officially announced to be the new members of Lordi.

On Halloween 2014 the seventh album Scare Force One saw daylight. This time all recordings and production was done in Finland with the producer Mikko Karmila. The album included ten songs as well as solo tracks by Amen and Hella, and a special German release came with a booklet of illustrated lyrics where all the songs were seen also in comic book form.

MONSTEREOPHONIC (Theaterror vs. Demonarchy) Track List:
SCG8 One Message Waiting
Let’s Go Slaughter He-Man (I Wanna Be The Beast-Man In The Masters Of The Universe)
Hug You Hardcore
Down With The Devil
Mary Is Dead
Sick Flick
None For One
SCG VIII Opening Scene
Demonarchy
The Unholy Gathering
Heaven Sent Hell On Earth
And The Zombie Says
Break Of Dawn
The Night The Monsters Died 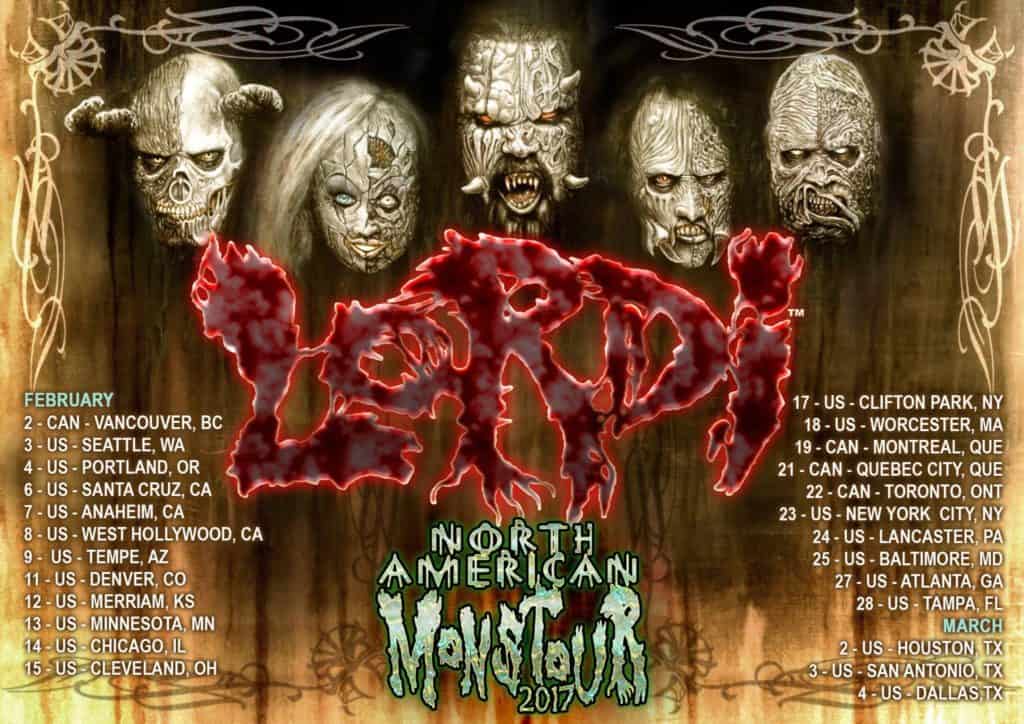 March 6, 2017 Diane Webb
Help Get The Word Out By Sharing This With Your Friends

May 16, 2017 Diane Webb
Help Get The Word Out By Sharing This With Your Friends

June 19, 2017 Patrick Burt
Help Get The Word Out By Sharing This With Your Friends