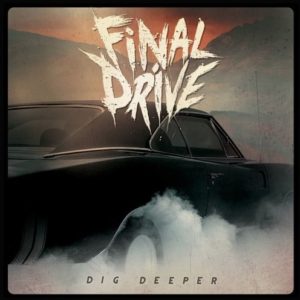 St Louis Groove Thrasher’s Final Drive are at it again with their upcoming release Dig Deeper that’s set to drop on February 3rd.

The follow up to the 2014 release Lifeswork, Dig Deeper is another great release from Final Drive. Aggressive, angry, heavy and seriously thought provoking lyrics through out this entire album. If there’s a new album you should be adding to your collection this year, this should be one of your early grabs of 2017. You are going to want to get up an move while you are listening to this one.

The first three tracks “This Is How, Built To Break, The Last Time” are solid fast paced thrash songs with a bit of groove in the blend.  Hitting the fourth track “Six Feet Down”  it slows down just a bit for more of the groove sound, but by the fifth track “Want It All” Final Drive speeds the tempo back up for some more aggressive thrash.  Then into the sixth track “Life Decided” it is back to a mix of thrash and groove and stays there through the remaining tracks “Follow the Curse, Beneath Us, Of A Killer and Black Out“.

Final Drive states they like Pantera, Clutch, Slayer & AC/DC on their Facebook page and listening to this new album I hear many influences in their music but more over, I hear Final Drive‘s own sound which stands out as theirs.  This is great album and if it doesn’t inspire you to get up off your ass and thrash around, nothing will.  I can’t wait to catch Final Drive doing a live show with this release, the pits are going to be in full force with this sound.  Pre-Order a copy of Dig Deeper today, you don’t want to miss this one!

You can pre-order your copy now through:
Amazon
iTunes
Band Website

Dig Deeper Track List:
This Is How
Built To Break
The Last Time
Six Feet Down
Want It All
Life Decided
Follow the Curse
Beneath Us
Of A Killer
Black Out

April 11, 2019 Diane Webb
Help Get The Word Out By Sharing This With Your Friends

Help Get The Word Out By Sharing This With Your FriendsLast week, our hometown boys […]

September 7, 2017 Diane Webb
Help Get The Word Out By Sharing This With Your Friends

June 24, 2021 Diane Webb
Help Get The Word Out By Sharing This With Your Friends