The team at Sweden Rock Festival are hard at work planning the 2017 festival which takes place June 7-10, 2017. Late last year they made their first band announcements which coincided with the opening of ticket sales on November 24th, then released the second round of announcements before their holiday break leaving fans wondering how they can top the announced lineup.  Clearly after today’s band announcement they are going strong with booking!

Here is the rundown of band announcements so far: 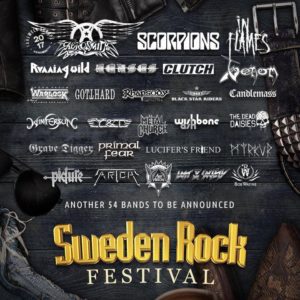 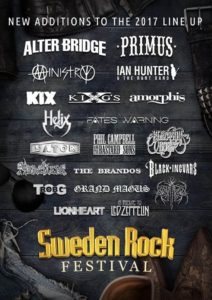 This leaves Sweden Rock with 35 more bands to reveal before this years festival.

In addition to the band announcements, on January 17th the festival announced it’s yearly band competition that lets the fans pick 4 lesser known bands they want to see perform live at the festival. Besides playing at Sweden Rock Festival 2017, each of the winning bands will also get hotel accommodations, food and drinks on the show day, and of course wristbands for the entire festival. Each band will also get a 5000 SEK (approx $570 USD) compensation toward travel costs. You should check out all of these bands, you will discover some great new to you music! There are 135 bands from all over the world in the first round of voting. You can see the list, here a sample of their music and cast your votes on their website.

Tickets are on sale now and selling faster than last year, which sold out so don’t wait until the last minute to get yours.

Sweden Rock Festival has an official app to use for planning your shows and during the festival. It’s very helpful for keeping track of everything going on.  They are releasing a new app for 2017 which will be released in February.

Sweden Rock Festival has an official Spotify playlist so you can check out the bands on this years line up.

Getting to Sweden Rock Festival:
So now that you are looking at this festival and wanting to plan your own trip, let me take a few minutes to talk to you about the travel aspect of getting to Sweden Rock Festival for those of you reading this who’ve never been but want to go. I’ve been to this festival now for a few years and it’s no longer a mystery to me on getting there or where to stay. So let me tell you what I know.  In my own personal experience traveling from overseas, I fly into Copenhagen and rent a car. I like to do side trips whist in Sweden and Denmark. For me that’s become the normal routine but there are other options.

Train: Sweden Rock Festival is just east of the town of Sölvesborg in Blekinge County which is in the southern part of Sweden. It can be considered what in America we’d call the countryside. There are a few towns and small cities within 30 minutes to an hour drive of the festival site. The festival site itself is in Norje and literally sits next to the Baltic Sea, it is ocean side and yes even in June the water is brisk. So the quickest route to get to the SRF site from an international destination is flying into Copenhagen’s Kastrup airport (airport code CPH). There are two smaller regional airports within an hour of Sölvesborg as well. From Kastrup airport you can coordinate with the Öresundståg and SJ (trains), there is a terminal that is connected to the airport and you can purchase tickets at the terminal. You can coordinate trains into Kristianstad, Sölvesborg (This location is directly connected by train from Copenhagen) and Karlshamn and a few of the other outlying towns (check the train maps and schedules to see all locations) then catch the daily festival bus or a taxi to and from the festival site. The nearest train station is located in the city of Sölvesborg and is served Blekingetrafiken (If you do not read in Swedish you can scroll to the bottom of the page and click on the link “In English” to have the page translated).

Rental Car: You can rent a car from the airport and drive. It is about a 2 hour drive from Copenhagen to SRF and it is a beautiful drive too so have your camera ready! You could do the drive pretty easy without GPS, the signs are great on the motorways, but you will want a GPS in the towns so make sure you have one. Also, in some of the smaller towns you will run into people who do not speak English, so unless you speak and read Swedish well, I advise you to use a GPS so you don’t end up lost.  You also won’t see many of the towns or cities from the motorway so you can easily drive right past them. And coming from Copenhagen make sure you ask at the rental counter to get the transponder to cross the bridge when you pick up your car. The bridge is a toll bridge and the transponder lets you through, but be prepared to stop as you enter Sweden and as you return to Denmark for border control. If you are planning to take your car to the festival site each day or plan to camp and park at the site, make sure you have purchased a festival parking pass.

Bike: There is also a safe bike path that goes to the festival site now. Check with your hotel or B&B if you are near the path and see if they have bikes you can rent or use. It’s a popular route.

Lodging:  There are all kinds of options for lodging for the festival. You can camp, caravan (RV), hotel, bed and breakfast, rent a private room in someones home and can even get a house for the week as some people choose to go on holiday during this time and rent their homes out on various sites like VRBO.com. Hotels in the area around this time fill up very fast so book ahead for your best and closest options. If you want to camp, check out the sites on the Sweden Rock page. You can see the map of the sites and you can select a site and book your spot if space is available. For hotels check the Sweden Rock site information. I’ve also booked hotels directly through their websites and through Booking.com. Most hotels come with a bit of distance so plan for your transportation so you can get back and forth to the site.

There are a few months left until the festival kicks off in all it’s glory, my personal favorite festival anywhere!  So check back as we keep talking about the updates for this years line up and talk more about what’s to do in and around the festival area.

June 16, 2017 Diane Webb
Help Get The Word Out By Sharing This With Your Friends

June 13, 2017 Diane Webb
Help Get The Word Out By Sharing This With Your Friends

The Melvins Play A Sold Out Show In Seattle