Over the last few years I started a list of must see artists that I have never seen before.  I have slowing been checking them off, but in December of 2015 when we lost Lemmy Kilmister followed shortly by David Bowie and most recently John English I have gotten much more serious about seeing artists I have enjoyed in my life but have never had the change to see live.  Luckily for me I had the pleasure of seeing these beloved artists we just lost over the last few months, but before last night I had never had a chance to see Paul McCartney so when I heard he was coming to Seattle I hurried to buy my ticket so I could see his show.  Not that I am expecting any artist I have not seen to pass away, let’s clear that point up right now!  I was already on the road to see all of the artists I have not had a chance to see live yet and he was one of them.

I didn’t know what to expect from Paul’s show.  Sure he was a Beatle, one of the pioneering musical groups of all time.  He has also been a solo artist, collaborated with many other artists, worked with Wings and has even been knighted by the Queen of England.  So what would his show entail for those of us in Seattle? Well last night I found out for myself.

It was a beautiful 70 degree evening in Seattle so many people were sitting outside around the International Fountain waiting for the doors to open.  As I walked across the Seattle Center grounds I was greeted by a bicycle Rickshaw taxi giving a couple a ride through the rhododendron lined paths that lead up to the Key Arena blasting the Beatles “She Loves You” while the couple in the back were clapping a singing along.  The lines to enter were long, luckily the Key has multiple entries around the building so it usually makes it a little easier to enter.  With that said, there were still long lines outside at 8:00pm when the show was scheduled to start which delayed the start of the show.  At 8:22pm we had one fan sitting behind us that was tired of waiting and starting screaming and cussing to get the show started.  Ahhhh I didn’t realize I was at a Guns & Roses show lol!  Luckily for all of us around him the show started a few minutes after his explosion.

Paul McCartney took the stage while doing a few waves to the sold out audience and led straight into the opening song of the night, “Hard Days Night”.  The crowd was up on their feet cheering and taking photos of this wonderful moment then they settled back down into their seats to enjoy the show.  The evening progressed with a little local homage to our beloved Jimi Hendrix with a musical outro of “Foxy Lady”.  Paul performed songs all through out his career and even reached way back into The Quarrymen for a song.  In between songs Paul removed his jacket and the ladies of the audience cheered like teenagers which prompted Paul to say that was his only wardrobe change of the evening.  Nice and playful with is fans! Cute, Paul, very cute.

As the encore arrived Paul had a special treat for the local Seattle audience, a surprise performance with Krist Novoselic of the band Nirvana.  Krist joined Paul on stage during Helter Skelter, the back drop was psychedelic and the lights were flashing wildly.  Many people knew who Krist was, but just as many didn’t.  Nirvana is not everyone’s musical taste, but Paul is fan of Nirvana for sure.  The crowd enjoyed the performance and a few fans got the song on video and uploaded to YouTube to share with the world.  Me, I had already put my camera down to just soak in what I was witnessing.  I have shared the video below, but with fair warning to anyone who has issues with strobe lights, it may make you not feel well so watch with caution.  All and all, this was a great show!  For my first time seeing Paul McCartney I was very pleased by this performance and would say to those of you out there who have yet to see him live, get out there and do it.  Paul is still in full North America tour mode and has many dates left so check his dates below and if you can, get a ticket to see him.  Either way there is video and a photo gallery (below the setlist) to enjoy!

Electric Set Pt. 2
Queenie Eye
New
The Fool on the Hill
Lady Madonna
FourFiveSeconds
Eleanor Rigby
Being for the Benefit of Mr. Kite!
Something
Ob-La-Di, Ob-La-Da
Band on the Run
Back in the U.S.S.R.
Let It Be
Live and Let Die
Hey Jude 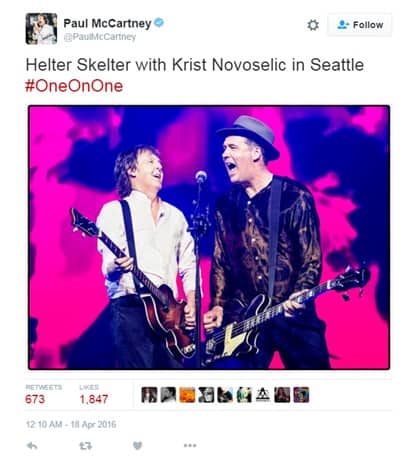 Interview With Andy Marsh of Thy Art Is Murder

September 8, 2017 Patrick Burt
Help Get The Word Out By Sharing This With Your Friends

Fit For A King, In Hearts Wake, Like Moths To Flames and Phinehas Hit Seattle

December 20, 2017 Diane Webb
Help Get The Word Out By Sharing This With Your Friends

Help Get The Word Out By Sharing This With Your FriendsThe Fit For A King, […]

June 11, 2018 Patrick Burt
Help Get The Word Out By Sharing This With Your Friends